HOUSTON (NYTIMES) - Severe thunderstorms struck parts of Texas and Oklahoma on Monday evening (May 21), producing short-lived tornadoes – including stunning images of side-by-side twisters in rural Oklahoma – but as of early Tuesday the region appeared to have been largely spared from violent weather that had been feared by forecasters.

The warning by forecasters, issued by the National Weather Service’s Storm Prediction Centre in Norman, Oklahoma, predicted a “major severe weather outbreak” on Monday over parts of northwest Texas and western and central Oklahoma, including a series of “potentially long-track and violent” tornadoes.

By early Monday evening, scattered tornadoes briefly touched down in largely rural areas in southwest and north-central Oklahoma, causing some damage but no reported injuries or fatalities.

The new concern became severe flooding, as a long line of sluggish storms moved east across the state and dumped heavy rainfall.

In the north-central part of the state, local television crews captured images of two twin tornadoes in a rural region near the small town of Crescent.

In the southwestern corner of the state near the Texas border, a tornado appeared to strike some homes near Mangum, a town of 3,000 more than 240km from Oklahoma City.

National Weather Service forecasters posted a message on Twitter shortly after 5pm local time, warning about that tornado near Mangum. “Take cover NOW!” a forecaster wrote in the tweet.

Later in the evening, forecasters issued a tornado watch until 5am Tuesday for nearly 3 million people in Oklahoma and Texas, saying the potential remained for lime-size hail and strong tornadoes.

As part of the warning issued earlier on Monday, the Storm Prediction Centre took the rare step of announcing a "high risk" zone for potentially catastrophic tornadoes, the first time in two years that the centre had designated such an area. 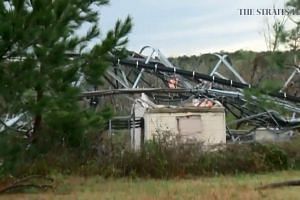 At least 23 dead in Alabama tornado, toll expected to rise

Numerous cities and towns were placed in the high-risk zone, including the Texas towns of Childress, Haskell and Snyder, as well as Oklahoma City, Norman, Lawton and Moore in Oklahoma.

The timing of the warning was particularly ominous for residents of Moore, a suburb just south of Oklahoma City: Monday was the six-year anniversary of a deadly tornado that struck the town. In 2013, a tornado devastated Moore, destroying an elementary school and killing several students inside. That tornado carved a destructive path in the region for 27km and killed 24 people, including 10 children.

The city, which has been rebuilt following the 2013 tornado, is used to being in the path of twisters: It has been hit by four tornadoes since 1999, and numerous others long before that.

This time, however, the anniversary appeared to pass tornado-free.

“You don’t ever forget it,” said state representative Mark McBride, whose district includes the town. “I think in my legislative district I lost 1,100 homes – just totally wiped out. My parents lost their home. We built back. My parents built back. We’re a pretty tough bunch.”