WASHINGTON (REUTERS) - President Donald Trump on Monday (March 11) will ask the US Congress for an additional US$8.6 billion (S$11.6) to help pay for his promised wall on the US-Mexico border to combat illegal immigration and drug trafficking, officials familiar with his 2020 budget request told Reuters.

The demand, which drew swift criticism from Democrats, is more than six times what Congress allocated for border projects in each of the past two fiscal years, and 6 per cent more than Trump has corralled by invoking emergency powers this year.

Democrats, who oppose the wall as unnecessary and immoral, control the US House of Representatives, making it unlikely the Republican president's request will win congressional passage. Republicans control the Senate.

The proposal comes on the heels of a bruising battle with Congress over wall funding that resulted in a five-week partial federal government shutdown that ended in January, and could touch off a sequel just ahead of a trifecta of ominous fiscal deadlines looming this fall.

"President Trump hurt millions of Americans and caused widespread chaos when he recklessly shut down the government to try to get his expensive and ineffective wall," said Speaker of the House of Representatives Nancy Pelosi and Senate Minority leader Chuck Schumer in a joint statement on Sunday.

"Congress refused to fund his wall and he was forced to admit defeat and reopen the government. The same thing will repeat itself if he tries this again. We hope he learned his lesson," said the two top Democrats in Congress.

Asked on Fox News Sunday about the new wall funding request and if there would be another budget fight, White House economic adviser Larry Kudlow said, "I suppose there will be... He's going to stay with his wall and he's going to stay with the border security theme. I think it's essential." 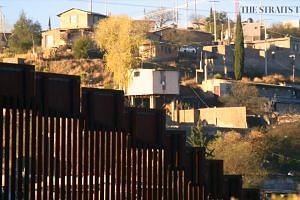 Broadly speaking on the budget, Kudlow told Fox, "The president is proposing roughly a 5 per cent across-the-board reduction in domestic spending accounts."

Regardless of whether Congress passes it, the budget request could help Trump frame his argument on border security as the 2020 presidential race begins to take shape, with the president seeking re-election.

"Build the wall" was one of his signature campaign pledges in his first run for office in 2016.

"Finish the wall" is already a feature of his re-election campaign, a rallying cry plastered across banners and signs at his campaign rallies.

"It gives the president the ability to say he has fulfilled his commitment to gain operational control of the southwest border," an administration official, speaking on condition of anonymity, said of the budget request.

"We have provided the course of action, the strategy and the request to finish the job. It's a question of, will Congress allow us to finish the job," a second administration official said.

Funding legislation needs to be passed before Oct 1 - the start of the 2020 federal fiscal year - or the government could shut down again. If Congress and the White House fail to agree to lift mandatory spending caps set in a 2011 law, steep automatic cuts in many programmes would kick in. Around the same time, Trump and lawmakers must agree to lift the debt ceiling, or risk a default, which would have chaotic economic fallout.

Trump's wall request is based off a 2017 plan put forward by Customs and Border Protection officials to build or replace 1,162km of barrier along the border, which in total is estimated to cost about US$18 billion.

For fiscal 2019, Trump demanded US$5.7 billion in wall funds, but Congress appropriated only US$1.375 billion for border fencing projects.

Following the rejection of his wall funding demand, Trump declared the border was a national emergency - a move opposed by Democrats and some Republicans - and redirected US$601 million in Treasury Department forfeiture funds, US$2.5 billion in Defense Department drug interdiction funds and US$3.6 billion from a military construction budget, for total spending of US$8.1 billion for the wall.

The administration has not estimated how far the 2019 funds will go, but officials said average costs are about US$25 million per mile (1.6km).

The Department of Homeland Security is one of a few priority areas to get a boost in Trump's budget plan, which seeks to slash funding to many non-defence programmes.

Trump will propose an overall 5 per cent increase to the Department of Homeland Security budget over fiscal 2019 appropriations, including US$3.3 billion, or 22 per cent more, for Customs and Border Protection, and US$1.2 billion more for Immigration and Customs Enforcement, a 16 per cent hike, officials said.

The budget proposal includes a plan to hire more than 2,800 law enforcement and support personnel for the agencies, and 100 immigration judge teams, officials said.

Trump faces both political and court battles to free up the money he wants for the current fiscal year. Many lawmakers accused Trump of overstepping his constitutional powers by declaring an emergency to free up the funds. The House has already voted to revoke the emergency, and the Senate is likely to do the same this week. Trump is expected to veto the resolution.

A coalition of state governments led by California has sued Trump to block the emergency move, though legal experts have said the lawsuits face a difficult road.