WASHINGTON (AFP) - In Europe, Mr Donald Trump's relationships with leaders range from lukewarm to hostile. But in Asia, more than ever, the US president is finding that he's among friends.

At a time that Mr Trump is ramping up pressure on China, he has built warm relationships elsewhere in Asia and has recently seen surprise electoral triumphs by key partners.

Japan is rolling out the red carpet for Mr Trump, who will become the first foreign leader to meet newly enthroned Emperor Naruhito. Mr Trump will bond with conservative Prime Minister Shinzo Abe over sumo wrestling and, weather permitting, their latest rounds of golf.

Mr Trump's trip comes on the heels of India's election in which Prime Minister Narendra Modi, a Hindu nationalist who has enthusiastically built ties with Washington, won an unexpectedly strong new mandate, as well as Australia's polls, where Prime Minister Scott Morrison stunned pundits by beating back a challenge from the Labor Party, whose promises included a "more considered" approach to China.

Mr Trump will return to Japan in June for the Group of 20 summit in Osaka and also visit South Korea, where President Moon Jae-in, despite coming from the opposite end of the political spectrum, laid the groundwork for one of Mr Trump's signature foreign policy initiatives - direct negotiations with North Korea.

The diplomacy comes amid an intense trade war between the US and China that has no end in sight, with Mr Trump blacklisting Chinese tech titan Huawei and demanding an end to allegedly rampant theft of US technology.

Envisioning a long-term US struggle against China, the Trump administration has said it is working on a comprehensive policy to counter the rising Asian power, akin to the Cold War doctrine of containing the Soviet Union.

Professor Toshihiro Nakayama from Keio University in Tokyo said the Japanese were fully aware of the controversial nature of Mr Trump, who is facing rising calls for impeachment from Democrats.

But the US, which stations some 50,000 troops in Japan under a defence alliance, is by far the most important ally for Tokyo - as well as an often difficult partner on trade. 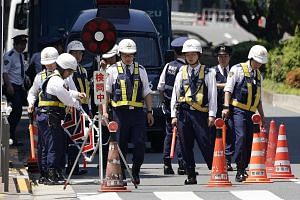 Earthquake causes Tokyo buildings to shake ahead of Trump visit

"There's a consensus that if the American people chose Mr Trump, it's not our job to criticise it; it's our job to manage the relationship," said Prof Nakayama, also a fellow at the Woodrow Wilson Centre for International scholars in Washington.

French President Emmanuel Macron "initially tried to embrace him with style and nuance and it didn't succeed. So the Japanese government and people say that if you're going to embrace Mr Trump, you have to totally embrace him," Prof Nakayama said.

Mr Trump came of political age talking tough on trade in the 1980s, when Japan loomed large in the US imagination as a competitor. But Mr Abe has courted Mr Trump assiduously since the mogul's stunning election in 2016, gifting him gold-plated golf clubs and flying halfway around the world to celebrate his wife Melania's birthday.

Mr Patrick Buchan, a longtime Australian official who directs the US Alliances Project at the Centre for Strategic and International Studies in Washington, said Mr Abe served as a global model on how to woo Mr Trump - making the relationship personal and resolving concerns through private channels.

"The Europeans, in my opinion, completely mishandled the Trump phenomenon. By responding to his public rhetoric or his Twitter tirades, you only created a vicious circle," Mr Buchan said.

"I think it is partly, if you want, the Asian way of not engaging in megaphone diplomacy," he said.

COMMON CAUSE ON CHINA

To be sure, Mr Trump's ties with allies in the region have also hit rocky patches. Shortly after Mr Trump's election, he reportedly exploded and hung up the phone on Australia's then prime minister Malcolm Turnbull, when he heard of a deal on moving refugees from Australia to America.

And in India, accounts that Mr Trump likes to mimic Mr Modi's accent have sparked outrage.

But on strategy in Asia, leaders have found common ground. China has longstanding claims on territory administered by both Japan and India, while Australia has also voiced worries about Beijing's trading practices.

Mr Modi - who will meet Mr Trump alongside Mr Abe in Osaka - has sided unabashedly with the US despite India's historic resistance to alliances, building a defence relationship but stopping short of accepting any joint military operations.

Mr Modi "has been willing to take the relationship with the US further than any of his predecessors," said Mr Michael Kugelman, deputy director of the Asia programme at the Wilson Centre.

But Mr Kugelman warned that trade disputes could cloud the relationship. Mr Trump is ending key trading preferences for India and forced the energy-hungry economy to stop buying from Iran and Venezuela.

Still, "I think Modi recognises that India's national interests are tightly aligned with the US on issues like China's increasing presence in Asia and the terrorism threat in South Asia," Mr Kugelman said.