WASHINGTON (WASHINGTON POST) - President Donald Trump took fresh aim on Tuesday (March 19) at the late senator John McCain, calling his 2017 vote on a health-care Bill "a disgrace" and saying he never was and never would be a fan of the Arizona Republican, who died of brain cancer seven months ago.

Trump's comments came during a meeting in the Oval Office with Brazilian President Jair Bolsonaro in response to a reporter's questions about his continuing disparagement of McCain, including in multiple tweets over the weekend.

"I'm very unhappy that he didn't repeal and replace Obamacare, as you know," Trump said, referring to McCain's vote against overhauling the Affordable Care Act in July 2017.

"He campaigned on repealing and replacing Obamacare for years, and then he got to a vote, and he said thumbs down."

Trump asserted that McCain had told the White House hours before his no vote that he would support the president.

"I think that's a disgrace, plus there are other things," Trump said.

"I was never a fan of John McCain, and I never will be." 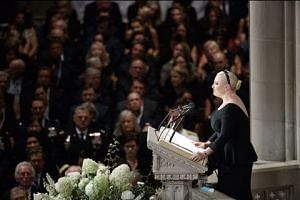 Trump arrives at golf course as McCain funeral under way

Trump has fixated on the health-care vote since it occurred. Amid a spate of tweets over the weekend, the president called it a "stain" on McCain's record and later took another swipe at him, falsely asserting that he was "last in his class" at the US Naval Academy in Annapolis, Maryland.

Later that day, Trump retweeted a tweet from a supporter who wrote that "millions of Americans truly LOVE President Trump, not McCain."

Despite his assertion that he was never a fan, Trump made multiple campaign donations to McCain in 2008, the year he was the Republican presidential nominee.

Trump made three separate contributions totalling US$5,600 (S$7,500), in excess of the legal limit at the time, prompting the McCain campaign to refund US$1,000, according to the Centre for Responsive Politics.

As Trump emerged as a force in the Republican Party, friction between the two men grew.

During his campaign for the GOP nomination, Trump said that McCain, who spent more than five years as a prisoner of war in Vietnam, was "not a war hero," and continued to snub the longtime senator throughout McCain's battle with brain cancer.

McCain, in turn, pulled no punches in criticising the president on foreign policy and other issues, including in a stinging denunciation of Trump's summit with Russian President Vladimir Putin in Helsinki in July.

McCain called Trump's comments at a joint news conference with Putin "one of the most disgraceful performances by an American president in memory," adding that Trump "proved not only unable, but unwilling to stand up to Putin."

After McCain's death in August, Trump drew widespread criticism after flags that had been lowered to half-staff at the White House were raised back to full staff before McCain's burial.

Meghan McCain, the late senator's daughter, offered thinly veiled criticism of Trump during a eulogy for her father and has been far more outspoken in recent days.

"He spends his weekend obsessing over great men, because he knows it, and I know it, and all of you know it, he will never be a great man," McCain, a co-host of ABC's The View, said of Trump during Monday's episode.

Upon seeing derogatory tweets about her father, McCain said she thought "your life is spent on your weekends not with your family, not with your friends, but obsessing, obsessing over great men you could never live up to."

"That tells you everything you need to know about his pathetic life right now," she added.