WASHINGTON (BLOOMBERG) - US President Donald Trump placed himself at the site of the nation's worst terrorist attack on Monday (July 29), saying "I was down there" as he signed legislation to provide lifelong medical care and compensation to Sept 11 emergency workers.

"Many of those affected were firefighters, police officers and other first responders," Mr Trump said at a Rose Garden ceremony to sign the Bill, which passed Congress last week after a delay that drew criticism from Democrats.

Mr Trump was interviewed by NBC News near the site of the destroyed World Trade Centre two days after the attack and described the damage and the difficulty of cleanup and reconstruction.

There is otherwise little evidence he spent much time at what's known as Ground Zero. The White House and his campaign didn't immediately respond to questions about when he visited or how long he was there.

His remarks on Monday drew fresh attention to the president's controversial and sometimes callous exploitation of the Sept 11 attacks to burnish his image.

Shortly after the attacks, Mr Trump inaccurately said in a television interview that his skyscraper at 40 Wall Street had become the tallest building in downtown Manhattan with the collapse of the trade center. The Washington Post reported that a building one block east was taller.

Mr Trump falsely claimed during his 2016 presidential campaign that "thousands" of Muslims in New Jersey celebrated the collapse of the World Trade Centre. His remarks stoked racial and religious tensions by citing an incident that never happened.

After the attacks, Mr Trump collected US$150,000 (S$206,000) from a New York state recovery fund for small businesses for losses at 40 Wall St, known as the Trump Building, which stands about seven blocks from the World Trade Centre site.

Mr Trump said the funds were an automatic reimbursement for "the fact that I allowed people, for many months, to stay in the building, use the building and store things in the building," according to Time magazine. 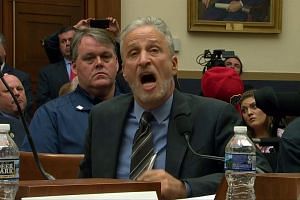 "The value of what I did was far greater than the money talked about, much of which was sent automatically to building owners in the area," Mr Trump said in a statement quoted by Time.

But Mr Trump's application for the money cited costs for cleanup, repair and rent loss, according to the New York Daily News.

More than 340 New York City firefighters who responded to the attacks died on Sept 11, 2001. Since then, 200 more have died from related illnesses, the city said. Hundreds more police, fire fighters and other emergency workers have claimed illness and disability from working on the site of the attacks.

The Bill Mr Trump signed would make a fund established to pay for care and compensation to those first responders essentially permanent. Congress provided about US$4.6 billion to the fund in 2017, but the amount has proved insufficient. Under the new law, the fund's resources would be extended through at least fiscal 2092.

Representative Carolyn Maloney, the New York Democrat who wrote the legislation, was not invited to Monday's White House ceremony, her spokeswoman Jennifer Bell said in an e-mail.

"We pledge to stand by the families of those affected today and everyday," Mr Trump said in the Rose Garden.

While the legislation had broad support in both chambers, there was some resistance in the Senate from a couple of conservative Republicans. Senator Rand Paul of Kentucky offered an amendment to offset the new funding with cuts elsewhere, while Senator Mike Lee of Utah sought a shorter extension of the fund. Both of their amendments were defeated just before the legislation was cleared for Mr Trump's signature. Paul and Lee were the only senators to vote against it.