FLORIDA (BLOOMBERG) - Hurricane Irma hopscotched up Florida's west coast on Sunday (Sept 10), making two landfalls and driving a wall of water and winds that submerged Miami and had the Tampa Bay area readying for its worst disaster in decades.

The storm made landfall over the lower Florida Keys about 9am with category four winds hitting 209km per hour. At 3.35pm, it made a second landfall at Marco Island as a category three, with weakening winds. It was headed on a path threatening Alabama and Georgia.

Irma is so large that cities on the state's southern and eastern extremes are being hit with surges and winds high enough to topple cranes in Miami, where the flooded Brickell financial district looked like a swift river.

"We are about to get our own version of what hell looks like," Tampa Mayor Bob Buckhorn said in a CNN interview.

Just over two weeks after Hurricane Harvey struck the heart of US energy production in Texas, Irma is threatening another region with almost US$200 billion (S$268 billion) worth of damage.

Its path forced the largest evacuation in Miami-Dade County history and sent millions of Floridians fleeing the state's first major hurricane since Wilma in 2005. It has already laid waste to the small island of Barbuda, killed at least 25 people and left thousands homeless across the Caribbean.

By Sunday afternoon, Irma had knocked out power to more than 2 million customers, paralyzed tanker traffic and shut about 6,000 gasoline stations. As the storm makes its way up Florida's west coast, it'll also threaten more than US$1 billion worth of crops.

NextEra Energy Inc.'s Florida Power & Light utility warned on Sunday that some customers may go without power for weeks and parts of its system may need to be rebuilt "from the ground up."

The company took offline one of two reactors at its Turkey Point nuclear plant south of Miami. Ports critical to supplying the state with gasoline and diesel were also closed, and energy companies including Exxon Mobil Corp. shut fuel terminals.

Irma's last-minute shift westward may exacerbate damages for victims who expected to miss the worst of the storm, and then were left with too little time to prepare.

"Most people expected it to impact the east coast rather than the west coast," said Duncan Ellis, the US property practice leader at Marsh & McLennan Cos.' main brokerage unit. "It took a turn to the left, and that's caused a bit of a scramble in getting properties ready for the storm and evacuations."

Just before Irma's landfall, Enki Research disaster modeler Chuck Watson said the storm could cost US$192 billion and threatens US$2 trillion of property. Total losses from Hurricane Katrina reached US$160 billion in 2017 dollars after it slammed into New Orleans in 2005.

In Washington, the House of Representatives said lawmakers shouldn't expect planned votes Monday because of absences caused by the storm, according to an announcement by the office of Majority Leader Kevin McCarthy. And President Donald Trump described the hurricane as "a storm of enormous destructive power."

In Miami, two cranes collapsed in the downtown area. Miami officials said in a news release that they were contacting neighbors and warning them to stay away from walls and windows near one, whose wreckage teetered over thin air. 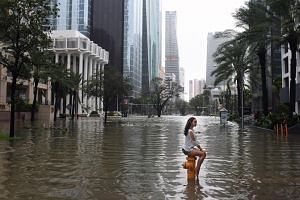 Along flooded Brickell Avenue, side streets became tributaries and wind whipped up whitecaps on water coursing by office buildings in the financial district.

At the J.W. Marriott hotel in the neighbourhood, guests were pulled into an emergency shelter in the fifth-floor ballroom as cell phones started beeping weather warnings. Hotel staff set up a video screen to play movies, provided board games and even a special room for pet care.

Speakers played soothing lounge music, and a giant video screen cycled images of tropical beaches.  In Pinecrest, a town south of downtown Miami, Tom Atkinson and his wife rode out the storm inside their one-floor home. They holed up on patio furniture they'd set up in a bedroom, watching the wind rip through their yard in great gusts. Peeking through a crack between his shutters, Atkinson saw a great mango tree that had been uprooted by the wind lying on the ground.

Worse could be in store farther north. The storm's track along Florida's west coast "is almost, if not, a worst-case scenario for Tampa Bay," said Rob Miller, a meteorologist at AccuWeather Inc. in State College, Pennsylvania. "It shoves all the water into Tampa Bay and then shoves it right into downtown."

On the city's Bayshore Boulevard, the waters of Tampa Bay had receded as much 200 ft Sunday morning. Detritus such as discarded beer cans and sea shells could be seen atop muddy sand that until recently had been submerged.  Downtown, the commercial centre, the port and cruise terminal were virtually deserted as rain increased and winds picked up. Buildings were fortified with boards over windows and walls of sandbags at the doors.

Geoff Rutland, 40, a lifelong Tampa resident, and his wife decided to ride out the storm with five other families and a pastor in the Crossing Jordan Family Worship Centre.

At an ice vending machine about a block away, there was a line as much as 30 deep. He helped others tie ice bags, fill coolers and keep calm.

During a phone interview he repeatedly paused to refuse tips from those he helped. "I'm not here for money," he said. "I'm just here to help people."