WASHINGTON (BLOOMBERG) - Howard Schultz is unlikely to land in the White House if he makes an independent bid for the presidency, but he would probably pull enough votes away from a Democratic candidate to strengthen Donald Trump's prospects for re-election.

That is the conclusion of a survey examining the former Starbucks Corp chief executive officer's political ambitions conducted by Optimus, a data-science firm that is studying the effects of independent candidates on the 2020 race.

The 65-year-old Seattle billionaire is drawing 7.7 per cent of voters overall, but pulls twice as much support from Democrats (11.6 per cent) as Republicans (5.6 per cent). The poll highlights the reason Democrats reacted so angrily to Schultz's announcement that he is considering running for president as a centrist independent: the leading Democratic presidential hopefuls fare worse against Trump when Schultz is included in the race.

The national survey of 1,290 registered voters found former vice-president Joe Biden leading Trump 50 per cent to 43 per cent in a head-to-head match-up. But Biden's lead shrinks to 4 per cent when Schultz is included. Trump narrowly led Senator Kamala Harris 45 per cent to 43 per cent, but his lead swelled to 4 per cent with Schultz as an option. Trump also led three-way races against Senator Elizabeth Warren and former Representative Beto O'Rourke.

Schultz says he is banking on a "silent majority" of Americans who are fed up with what he considers to be the extremity of the two major parties. His advisers point to the growing number of political independents as evidence of a potential constituency, although experts say most independents actually are reliably partisan and not the kind of moderate swing voters that Schultz considers himself to be. Finding a path to 270 electoral votes would require him to win sizeable numbers of Democrats and Republicans, in addition to independents.

The path for an independent to win the White House is particularly onerous. Optimus modeled several possible outcomes for Schultz and found that even winning 33 per cent of the popular vote would likely only net him about 22 electoral votes. 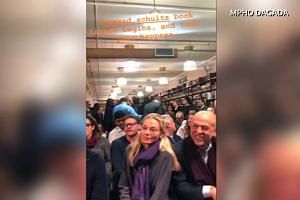 Why billionaires with big egos dream of being president

"In order to win as a centrist independent, our models suggest he'd have to carry at least 37 per cent of the popular vote, while taking between 22 per cent and 45 per cent each of Democrats, Republicans and independents," says Tranter. "Realistically, he'd have to displace one of the major-party nominees." In 1992, billionaire H. Ross Perot won 19 per cent of the vote - the highest total of any recent independent candidate - and did not win a single electoral vote.

To mount a viable campaign, the former Starbucks chief executive will first have to make himself better known to voters. The Optimus survey, conducted from Jan 30 to Feb 1, found that fewer than half of respondents (48 per cent) could identify him.

Schultz's announcement that he is considering an independent run triggered a furious reaction from Democrats. He was heckled at a book event the day after he appeared on CBS's 60 Minutes and lambasted by Democrats.

"It's not just that he'd help re-elect Donald Trump, but that he came across as a spoiled billionaire more concerned with protecting his fellow billionaires from paying a lot of taxes than protecting Medicare and Social Security for the middle class," says Geoff Garin, a Democratic pollster.

Schultz's supporters are greyer, wealthier, and more educated that other voters, according to the poll by Optimus, which has worked with Republican candidates. Seventy per cent of his backers are older than 55, and there are more women (57 per cent) than men (43 per cent).

Schultz has been touring the country promoting his book and gauging his chances. He is set to deliver a speech on Thursday at Purdue University in Indiana. Schultz and his advisers have said that he will not enter the race unless he can significantly expand his base of support enough to give himself a realistic prospect of winning.

"He 100 per cent will only run if he sees a viable path. There's no chance he gets in this race if there isn't a path," Bill Burton, a former aide to president Barack Obama who recently joined Schultz's political team, said in a Jan 29 interview.

Although he faces a steep climb to viability, Schultz has plenty of time to get there.

"Right now, many Americans don't have an opinion about Schultz and, among those who do, their opinions are not favourable," says John Sides, a political scientist at George Washington University and co-author of Identity Crisis: The 2016 Presidential Campaign and the Battle for the Meaning of America. "It is far too early to say with any confidence how well Schultz would do against Trump and a Democratic nominee."