WASHINGTON (AP) - US President Donald Trump's trade conflict with China escalated this week when Beijing let its currency fall to its lowest level against the dollar in 11 years and suspended its purchases of US farm goods - and the Trump administration promptly branded China a "currency manipulator".

Mr Trump's response has little immediate practical impact. But together, the new developments raised the dangerous threat of a destabilising currency war that could infect the global financial system. The stock market responded on Monday with its steepest plunge of the year.

Things cooled a bit on Tuesday when China appeared to stabilise its currency, and the Dow Jones Industrial Average rebounded 311 points. But that was still less than half its loss on Monday.

WHAT IS A 'CURRENCY WAR'?

It occurs when two countries take steps to lower the value of their currencies to try to gain a competitive edge over each other.

A cheaper currency typically makes a nation's exports more affordable for foreigners - and makes imports more expensive. This action tends to protect a country's manufacturers, in particular, from foreign competition.

ARE THE US AND CHINA IN A CURRENCY WAR?

For now, no. The Trump administration has yet to respond to China's allowing its currency to fall by taking its own steps to lower the dollar's value to the yuan.

Still, this could happen: The option was raised in the White House late last month, according to media reports, and Mr Trump said on July 26 that he could take steps to devalue the dollar "in two seconds if I want to". 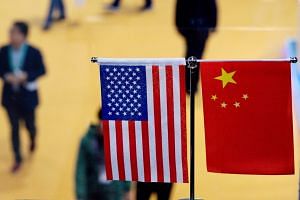 Weaponising the yuan: A double-edged sword for China

And earlier that month, Mr Trump had tweeted that China and Europe were "playing (a) big currency manipulation game" and the US either "should MATCH, or continue being the dummies who sit back and politely watch as other countries continue to play their games".

Megan Greene, an economist and senior fellow at Harvard's Kennedy School of Government, suggested that the Trump administration might decide to lower the dollar's value to retaliate against China simply because it has few other options. Still, she doesn't think the move would prove effective, partly because the yuan isn't widely available on currency markets. It would be hard for the US to buy enough yuan to drive up its value against the dollar.

"It seems like some kind of currency intervention is on the table, just not an effective one," Ms Greene said.

The Treasury Department maintains what it calls an Exchange Stabilisation Fund. It could use this fund to sell dollars and buy yuan, thereby reducing the dollar's value against the Chinese currency. But the fund contains about US$100 billion - not a large sum if your goal is to influence foreign exchange markets, which measure in the trillions of dollars.

And taking such steps would violate the international agreements that the United States has signed not to manipulate the dollar's value to gain trade advantages.

The Fed cut its benchmark rate last week, and investors expect further reductions in the fall. But on Tuesday, James Bullard, president of the Federal Reserve Bank of St. Louis, who voted for last week's rate cut, said the central bank has "done a lot" and argued that it shouldn't respond to every fluctuation in trade tensions.

WHAT DAMAGE COULD A CURRENCY WAR CAUSE?

Over time, it would be significant. For China, driving the yuan lower would make it harder for its companies to pay off their dollar-denominated debts, because each yuan they earn would translate into fewer dollars.

In both countries, cheaper currencies generally raise the price of imports, which could spur inflation. That would also make Chinese imports costlier for American consumers.

"For the US to intervene to try to weaken the dollar would be a terrible mistake," said Sung Won Sohn, business economist at Loyola Marymount University in Los Angeles.

HAVE THERE BEEN CURRENCY WARS BEFORE?

The most notorious example occurred during the Great Depression of the 1930s, when the US and several European countries sought to devalue their currencies.

Jeffrey Bergstrand, a finance professor at Notre Dame and former Fed economist, said that such moves, along with rising tariffs, worsened the depression.

After World War II, the US, leading European economies, Japan, and others signed onto the Bretton Woods agreement. This accord established a system of fixed exchange rates with the idea of forestalling future currency fights.

Otherwise, the United States has intervened in currency markets only as part of coordinated international efforts to boost the global economy.

In September 2000, the United States, along with central banks in Europe and Japan, bought euros to drive the new currency off its record lows.

And in 1985, the G-7 countries agreed to the Plaza Accord. This was a landmark agreement that launched coordinated currency market interventions to sell dollars, which had risen so much in value that it hurt America's exports.