US President Donald Trump's trade conflict with China escalated this week when Beijing let its currency fall to its lowest level against the US dollar in 11 years and suspended its purchases of US farm goods, with the Trump administration promptly branding China a "currency manipulator".Here is a look at how a "currency war" could affect the two economies.

WHAT IS A CURRENCY WAR?

It occurs when two countries take steps to lower the value of their currencies to try to gain a competitive edge over each other.

This action tends to protect a country's manufacturers, in particular, from foreign competition.

ARE THE U.S. AND CHINA IN A CURRENCY WAR?

The Trump administration has yet to respond to China's allowing its currency to fall by taking its own steps to lower the dollar's value to the yuan.

Still, this could happen. The option was raised in the White House late last month, according to media reports, and Mr Trump said on July 26 that he could take steps to devalue the dollar "in two seconds if I want to". 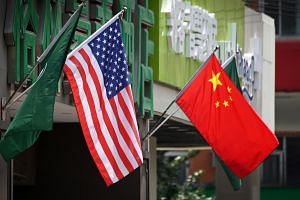 The Treasury Department maintains what it calls an Exchange Stabilisation Fund. It could use this fund to sell dollars and buy yuan, thereby reducing the dollar's value against the Chinese currency.

But the fund contains about US$100 billion (S$138 billion) - not a large sum if the goal is to influence foreign exchange markets, which measure in the trillions of dollars.

And taking such steps would violate the international agreements that the US has signed not to manipulate the dollar's value to gain trade advantages.

WHAT DAMAGE COULD A CURRENCY WAR CAUSE?

Over time, it would be significant.

For China, driving the yuan lower would make it harder for its companies to pay off their dollar-denominated debts, because each yuan they earn would translate into fewer dollars.

In both countries, cheaper currencies generally raise the price of imports, which could spur inflation. That would also make Chinese imports costlier for American consumers.

HAVE THERE BEEN CURRENCY WARS BEFORE?

The most notorious example occurred during the Great Depression of the 1930s, when the United States and several European countries sought to devalue their currencies.

University of Notre Dame finance professor Jeffrey Bergstrand, a former Fed economist, said that such moves, along with rising tariffs, worsened the Depression.

After World War II, the US, leading European economies, Japan and others signed on to the Bretton Woods agreement.

This accord established a system of fixed exchange rates with the idea of forestalling future currency fights.

A version of this article appeared in the print edition of The Straits Times on August 08, 2019, with the headline 'How a currency war could play out'. Subscribe
Topics:
More
Whatsapp Linkedin FB Messenger Telegram Reddit WeChat Pinterest Print Copy permalink