WASHINGTON (AFP) - Shock over a puppy's death on a United Airlines plane has renewed scrutiny over airline handling of pets, after a flight attendant demanded the animal travel in an overhead bin where it apparently suffocated.

A string of calamities linked to pets on planes has inflamed a grim public relations nightmare for United, which in the past year has dealt with the death of a valuable giant rabbit, outrage over its refusal to allow an "emotional support" peacock to board, and now the death of a 10-month old French bulldog.

While travelling from Houston to New York Monday with two children including an infant, Catalina Robledo was told Kokito, the family's black pooch with deepset wrinkles and a squished-in nose, would need to travel in the overhead compartment, as its carrier was partially in the aisle.

The company requires travellers with pets to have a kennel that fits completely under the seat.

Speaking through tears to the network Telemundo, Robledo said she had paid appropriate fees to take her dog - which the family affectionately dubbed "Little Pig" - in the cabin rather than the luggage compartment.

"The puppy barked and barked but I couldn't get up," she said in Spanish, explaining she was holding her baby and there was turbulence.

After the 3.5-hour flight she opened the bin to find the puppy lifeless. 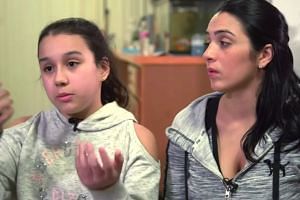 "I said, 'Kokito breathe, breathe.' But he was already dead," Robledo said.

The incident unleashed social media wrath and once again brought United - which took "full responsibility for this tragedy" - under the gun.

"This was a tragic accident that should never have occurred, as pets should never be placed in the overhead bin," United said.

The embattled carrier - which faced intense controversy last year when a male passenger was dragged kicking and screaming from an overbooked plane in Chicago - notches the most animal incidents during air transport among US airlines allowing pets to fly.

United reported 18 animal deaths and 13 injuries in 2017, according to the Department of Transportation.

To put the numbers in perspective, the airline successfully transported 138,178 pets that year - but ultimately 75 per cent of total animal deaths occurred on United flights.

It's at least the fourth year in a row United has hit the worst in-flight animal death record.

The carrier did not respond to AFP requests for additional comment.

The number of animals taking flight has grown in recent years, in part due to an uptick in owners bringing what are classified as "emotional support" pets.

A brouhaha last month saw United deny boarding to a peacock despite its owner's claim to "emotional support" status.

While Dexter the peacock was merely denied permission to board, Pebbles the hamster suffered a more grisly fate - flushed down the toilet after its owner was told her pet could not travel on Spirit Airlines.

Federal guidelines support the right of passengers with disabilities to board with a variety of emotional support or service animals, but airlines can deny boarding to some exotic or "unusual" pets.

United has cited a 75 per cent jump in emotional support animals brought on board over the past year, and starting March 1 implemented more stringent documentation requirements for such critters, mirroring steps by other major US airlines including Delta.

But the most recent controversy to strike United - which did not involve an emotional support animal - has brought to light once more the push-pull between the mushrooming population of passengers flying with animals and airlines' struggle to accommodate them.

"As an industry, we have a duty of care to ensure that standards and best practices are in place around the world to protect the welfare of animals when they travel by air," said Perry Flint, a spokesman for the International Air Transport Association who dubbed the latest incident "sad and regrettable".

The Association of Flight Attendants vowed to work to "make sure something like this never happens again."

"No one would think to put a baby in a luggage compartment," it said. "There is no reason to put a dog or any other animal there."

But there were also calls for passengers to exercise their judgment.

In guidance on its website, the Humane Society of the United States warns air travel is particularly dangerous for animals with "pushed in" faces - such as bulldogs - since they are especially vulnerable to oxygen deprivation and heat stroke.

If you must travel with pets, urges the society, "consider all the alternatives to flying."