WASHINGTON (WASHINGTON POST) - The act of kindness Johnny Bobbitt did for Ms Kate McClure when her car sputtered to a stop in front of him seemed destined to pull him from the depths of homeless and drug abuse he struggled with.

On that day in October last year, she was a motorist on Interstate 95 in Philadelphia who found herself stuck on an off-ramp, scared and out of gas.

He was a homeless veteran who told her to lock her doors, then spent his last US$20 (S$27) to bring her a canister of fuel.

Later, she sought to repay the favour, first with cereal bars, warm socks and spare dollars, then with a GoFundMe campaign to raise money so the Good Samaritan would not have to sleep under a bridge.

Bobbitt, she told anyone who would listen, deserved a fresh start.

"I wish that I could do more for this selfless man, who went out of his way just to help me that day," Ms McClure said in the GoFundMe campaign, which she and her boyfriend Mark D'Amico crafted in the car after visiting Mr Bobbitt.

"He is such a great guy, and talking to him each time I see him makes me want to help him more and more."

They hoped the GoFundMe would raise US$10,000, but the story resonated. It was featured in national newspapers, including The Washington Post.

The pair made an appearance on Good Morning America and were interviewed by the BBC - a feel-good story at the start of the holiday season. In a few months, the campaign had raised more than US$400,000 from nearly 14,000 donors, and Mr Bobbitt's prospects had brightened. 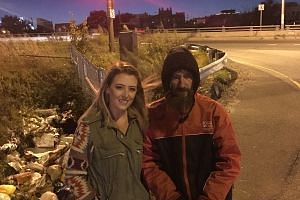 But over the past 10 months, the sweet story has soured.

There are accusations of mismanagement and outright theft of the money raised on Mr Bobbitt's behalf. The GoFundMe cash, Mr Bobbitt suspected, had been squandered on vacations, a luxury car and more than one addiction. And this weekend, the threat of litigation loomed.

Last autumn, Ms McClure said, the plan was to get Mr Bobbitt a house and his dream truck, a 1999 Ford Ranger. Mr Bobbitt also planned to donate money to people and organisations that had helped him as he struggled with homelessness.

The plan was to make the second act of his life a successful one, and for a while, things seemed happy.

In reality, things weren't that rosy. Instead of a house, Ms McClure and Mr D'Amico got Mr Bobbitt a camper, which they kept in their names and parked on land owned by Mr D'Amico's family, according to news reports. They bought him a television, a laptop and two cellphones, food and clothing - and a used SUV that was soon broken and idle.

What he didn't get, though, was any type of ownership over the money raised on his behalf.

He met a financial adviser briefly, but there was never any lawyer or any trust, according to Philadelphia CBS affiliate WTVR. Mr D'Amico said he kept US$200,000 - what remained after buying the camper and the SUV and other expenses - in a savings account that he would gladly turn over to Mr Bobbitt once he kicked an addiction to opioids and managed to hold down a job.

But Mr Bobbitt said he saw troubling signs for the money that thousands had donated to him.

Ms McClure is a receptionist for the New Jersey Department of Transportation and Mr D'Amico is a carpenter, according to the Philadelphia Inquirer.

But suddenly she had a new BMW and the couple was taking vacations to Florida, California and Las Vegas, Mr Bobbitt told the Inquirer. He learnt of a helicopter ride they took over the Grand Canyon.

And he told the Inquirer that Mr D'Amico has gambled away some of the GoFundMe money. (Mr D'Amico told the newspaper he had used US$500 from the account to gamble on a night when he forgot his SugarHouse Casino card, but had "quickly repaid" the money with his winnings.)

Good intentions had given way to something else, Mr Bobbitt told the Philadelphia Inquirer.

"With that amount of money, I think it became greed," he said.

According to the Inquirer, Mr D'Amico spoke of expenses he and his girlfriend had incurred caring for Mr Bobbitt, including time they took off from work.

And Mr D'Amico gave an "evolving account" of how he handled the money to the Philadelphia Inquirer: Initially, he said he would not produce financial records because the money was put into an existing account at PNC bank that does not belong to Mr Bobbitt. Last Wednesday, he said he and Ms McClure had opened up a separate account for Mr Bobbitt. Last Thursday morning, he said he told a reporter the trusts had been set up because that's what Mr Bobbitt wanted him to say.

The money that came to Mr Bobbitt couldn't stop his addiction. He went through two unsuccessful stints in rehab that brought him no closer to being sober. Some of the money GoFundMe donors gave to him ended up in the pockets of drug dealers, Mr Bobbitt told the Inquirer.

In April, six months after his fateful meeting with Ms McClure, Mr Bobbitt told the Inquirer that he had been clean for three weeks and jobless for much longer.

"It's going to be a struggle for the rest of my life," he said of his addiction.

Mr D'Amico, who frequently gave Mr Bobbitt a ride to counselling sessions and group meetings, told the Inquirer that giving a six-figure sum to a man addicted to opioids is "like me handing him a loaded gun. He has to do what he has to do to get his life together".

On Saturday, it was unclear how much of the money earmarked to Mr Bobbitt had actually gone to him. Mr D'Amico told the Inquirer he had made some lump sum payments to Mr Bobbitt, but he and Ms McClure did not return calls or messages to The Post seeking comment. They also didn't they provide financial statements or records in interviews with other news organisations.

Mr Chris Fallon, an attorney hired by Mr Bobbitt, told The Post on Saturday that they "are attempting to secure an accounting before a scheduled meeting on Monday" and didn't want to speak for fear of jeopardising arbitration efforts.

GoFundMe told the Associated Press it has launched an investigation to determine whether the money was mismanaged, and is working to ensure Mr Bobbitt "receives the help he deserves and that the donors' intentions are honoured".

If Mr Bobbitt's claims are true, it would be the biggest case of GoFundMe fraud or mismanagement seen by whistleblower organisation GoFraudMe, according to Ms Adrienne Gonzalez, the site's publisher.

Some of the hucksters are serial scammers, who can start dozens or hundreds of bogus campaigns in a day, said Ms Gonzalez. Others fake diseases, figuring no one will demand evidence of, say, a recent cancer diagnosis.

And still others, she said, end up unwitting fraudsters - unqualified to handle the vast sums of money they suddenly find themselves stewards of.

"From the bat, it's clear that there was no sort of plan," Ms Gonzalez said of Mr Bobbitt's case. "She didn't plan on it exploding, but once it started to explode, she didn't think about how this man was actually going to get help.

"People contributed, not thinking that this is a sick individual who needs help - and no amount of money is going to make that go away overnight."

Savvy donors should look for a plan that ensures the money will make it to a needy person, and some type of accountability measures to ensure donations don't end up in the wrong pockets, she said.

Nearly a year after meeting Ms McClure, the camper is gone, and so is the SUV. Mr Bobbitt told the Inquirer that he remains an addict, and still doesn't have access to the money that was supposed to turn his life around.

At night, he sleeps under a bridge at the intersection of Callowhill and Second Streets, near an I-95 on-ramp. He spends his days doing exactly what he was doing when Ms McClure's car stopped in front of him: panhandling.