It could just happen - not one, but two women could be on the Democrats' next US presidential ticket.

Experts say it may be unprecedented, but it would not be unthinkable for the party's front runner Hillary Clinton to choose liberal Massachusetts Senator Elizabeth Warren as her vice-presidential pick.

Many believe Ms Warren could appeal to voters who support Vermont Senator Bernie Sanders, and help unite the party after a long primary process.

"I think the one thing Hillary will look for is for someone that could help her with young voters, someone who could energise that group and bring them out to vote because she hasn't been doing well with young voters," said Dr Marty Cohen, James Madison University political science expert and co-author of The Party Decides, a book on the primary process.

"Some people don't think she will pick another woman and has to balance out the gender on the ticket, but I think the young voter issue will be more important," said Dr Cohen. 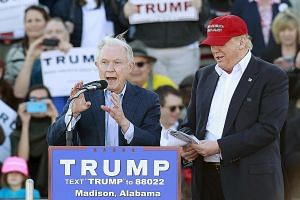 Who will be Donald Trump's running mate?

Last Tuesday, Ms Warren tweeted: "I'm going to fight my heart out to make sure @realDonaldTrump's toxic stew of hatred & insecurity never reaches the White House". This was then retweeted by Mrs Clinton's account the next day.

But not everyone agrees that Ms Warren is the right pick.

Assistant Professor Kelly Winfrey from Iowa State University's Carrie Chapman Catt Centre for Women and Politics said: "There is no guarantee that the young Sanders voters that have only recently become involved in politics will even show up to vote in November if Sanders isn't on the ticket."

"With Trump as the candidate, Clinton has a great chance to win Independents and peel away at some voters that usually vote Republican, particularly women," she said.

Additionally, political science professor Jeffrey Hill from Northeastern Illinois University points out that while many feel "regional balance is overrated", it wouldn't help that Mrs Clinton and Ms Warren are from the North-east of the country.

Another name that has been bandied around is Ohio Senator Sherrod Brown. Dr Kyle Kopko, co-author of the book The VP Advantage, said he is a progressive populist who would appeal to Bernie Sanders supporters as well.

"He is also a potential partner in government, who could get legislation through," said Dr Kyle, who is also assistant professor of political science at Elizabethtown College.

The one drawback that many have pointed out though, is that he would have to give up his Senate seat in Ohio, and Ohio governor John Kasich would most certainly appoint a Republican to serve, thus making it more difficult for the Democrats to recapture the Senate.

Ultimately, Dr Christopher Devine, co-author of The VP Advantage, believes Mrs Clinton knows all too well from her time in the White House that a vice-president plays a very significant role in modern US presidential administrations.

"She should draw upon this experience to choose someone who can help her govern effectively, rather than focus on a running mate's electoral appeal."

A version of this article appeared in the print edition of The Straits Times on May 09, 2016, with the headline 'Clinton's V-P choice 'could be a woman''. Subscribe
Topics:
More
Whatsapp Linkedin FB Messenger Telegram Reddit WeChat Pinterest Print Purchase Article Copy permalink