Hermine, now a post-tropical cyclone, was moving across the Outer Banks of North Carolina in an east-northeasterly direction at approximately 19 kmh, the Miami-based National Hurricane Centre (NHC) said.

The storm's latest fatality occurred when winds estimated between 96.6 kmh to 113 kmh blew an 18-wheeler across highway lanes in North Carolina and propelled the cab into the railing of a bridge, killing the unidentified driver, Tyrrell County Sheriff Darryl Liverman told AFP. The death brings the storm's casualties to two, after a homeless man was killed by a falling tree last Friday in Florida.

"Hermine is expected to intensify to hurricane force on Sunday," the NHC said in its latest bulletin. The Miami-based service also warned of an anticipated dangerous storm surge in the next 36 hours along the coast from Virginia to New Jersey.

Hermine was a hurricane when it slammed into Florida's Gulf of Mexico coast early on Friday, causing street flooding and power outages, the south-east state's first hurricane landfall since 2005.

It was downgraded later that day to a tropical storm as it moved north. 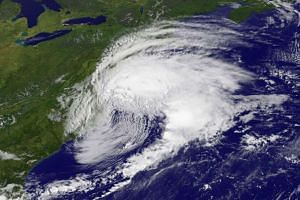 On Saturday, Hermine was barreling along the mid-Atlantic coast, raising tropical storm warnings as far north as Connecticut, north of New York.

It was expected to lose forward speed and then "meander" offshore of the Delaware, Maryland and Virginia coasts into Sunday, the centre said.

Hermine was forecast to dump up to 18cm of rain over parts of Virginia and Maryland through Monday morning.

Virginia Governor Terry McAuliffe declared a state of emergency on Friday under the potential threat of damaging high winds, heavy rainfall, and a dangerous storm surge and flooding.

"I urge Virginians to limit travel as the severe weather arrives and evacuate if recommended by officials," he said.

Hermine brought bad news for throngs of travellers hoping to enjoy beach time on the three-day Labour Day weekend, the unofficial end of the US summer vacation season.

The US forecasters predicted a storm surge and rising tide will cause flooding, with a potential deadly water level in southern Virginia and northern Carolina.

Hermine will lash the mid-Atlantic coastal areas with ocean swells through the weekend, they said.

"These swells are likely to cause life-threatening surf and rip current conditions, and significant beach erosion."

Hermine was the fourth Atlantic hurricane of 2016. The last hurricane to make landfall in the United States was Arthur in 2014 in North Carolina.