HOUSTON (AFP) - Police in Houston said on Wednesday (Aug 30) they have recovered the bodies of six family members whose van was swept away in flooding unleashed by Harvey over the weekend.

Manuel and Belia Saldivar and four of their great-grandchildren ranging from six to 16 years in age went missing on Sunday as they were attempting to escape from rising waters.

Their relatives returned to the scene of the tragedy on Wednesday as floodwaters subsided and alerted police that the van was now visible, Harris County Sheriff Ed Gonzalez said.

"We were able to retrieve the van, pull it out of the water," he said. "We have a total confirmed six dead here at the scene inside this van."

"Our worst fears have been realised," he said.

The white van became stuck in muddy water in a wooded area on Sunday morning, and started floating away in the current, according to accounts by the police and Mr Rick Saldivar, whose brother Sammy was driving it at the time. 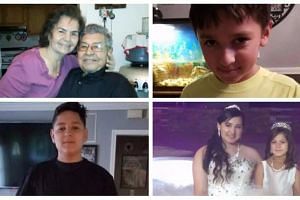 Sammy Saldivar was able to climb out of the driver's seat, but was not able to extricate his relatives, Rick Saldivar said.

"The bad thing is he said he kept hearing the kids screaming," Mr Rick Saldivar told television station KHOU. "That's what he's hearing in his head over and over."

Police officers called to the scene on Sunday were unable to help the other family members as the van was already submerged in at least four feet of water, said Mr Gonzalez, adding that the area between the front and back of the van was blocked by a metal mesh typical of work vans.

A chaplain and the medical examiner were at the scene on Wednesday, and the family had asked for privacy, police said.

"Obviously, they are devastated, as we all are as well," Mr Gonzalez said. "They're struggling with it."

US media have counted at least 30 deaths attributable to Harvey, and the death toll was expected to rise as floodwaters subside.

"I'm fearful that more will be found," said Mr Gonzalez.

Police in Houston said there were 17 people reported missing and unaccounted for.