BOSTON (NYTIMES) - A granddaughter of Robert F. Kennedy died on Thursday (Aug 1) afternoon after suffering an apparent overdose at the Kennedy compound in Hyannis Port, Massachusetts, according to two people close to the family.

The young woman, Saoirse Kennedy Hill, 22, was the daughter of Courtney Kennedy Hill. She was at the compound where her grandmother, Ethel Kennedy, 91, lives when emergency responders were called on Thursday afternoon, the family friends said.

She was taken to Cape Cod Hospital in Hyannis, where she was pronounced dead.

"Our hearts are shattered by the loss of our beloved Saoirse," the Kennedy family said in a statement. "Her life was filled with hope, promise and love." The statement quoted Ethel, Robert F. Kennedy’s widow, as saying, "The world is a little less beautiful today."

Before enrolling in Boston College, where she was a communication major and vice-president of the College Democrats, Saoirse wrote about her struggles with depression and mental illness for the student newspaper at Deerfield Academy, a private preparatory school in Massachusetts, in 2016.

Her depression, she wrote, "took root in the beginning of my middle school years and will be with me for the rest of my life". She described "deep bouts of sadness that felt like a heavy boulder on my chest". 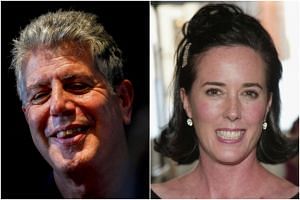 Celebrities: Are they more prone to depression?

Saoirse spent part of her childhood in Ireland, and often said she was proud of her Irish heritage and her Gaelic given name, which means freedom.

Her father, Paul Michael Hill, is one of the Guildford Four, who were falsely accused of involvement in Irish Republican Army bombings; he was imprisoned for 15 years before his conviction was overturned.

He and Saoirse's mother married shortly after his release in 1993, and separated in 2006. Saoirse marched in Cape Cod with her mother in March 2018 as part of a nationwide protest against gun violence, according to The Barnstable Patriot.

The Kennedy compound on Cape Cod is the storied summer residence of one of America's most enduring political dynasties. It consists of three white clapboard houses on 2.4ha of waterfront property along Nantucket Sound and was originally the home of Joseph P. Kennedy, the patriarch of the Kennedy clan.

The compound was a base of operations for the presidential campaign of his son John F. Kennedy in 1960, and later served as a summer White House. Senator Edward Kennedy kept the home as his primary Massachusetts residence for several decades until his death in 2009.

In 2012, the Kennedy family donated the main house to the Edward M. Kennedy Institute for the United States Senate.

The latest overdose adds to a litany of tragedies that have befallen the Kennedys and taken on the grim aura of a family curse.

President Kennedy and Senator Robert F. Kennedy were both slain by assassins. Their brother Joseph Kennedy Jr was killed in World War II, and their sister Kathleen Cavendish died in a plane crash in 1948.

The president's son, John F. Kennedy Jr, was killed in 1999 when the airplane he was flying crashed into the Atlantic Ocean off Martha's Vineyard; his wife and sister-in-law were on board and were also killed. Several other Kennedys have died young or in accidents.

Last month marked the 50th anniversary of Chappaquiddick, another Kennedy family tragedy that took place when Edward Kennedy drove off a bridge on a small island next to Martha's Vineyard.