Google has barred Huawei from updates to its Android operating system to comply with a US government ban, putting the Chinese smartphone maker on the ropes as it scrambled yesterday to assure customers it would continue to support existing smartphones and tablets.

Moving to contain the damage, a Huawei spokesman said: "We have made substantial contributions to the development and growth of Android around the world. Huawei will continue to provide security updates and after-sales services to all existing Huawei and Honor smartphone and tablet products, covering those that have been sold and that are still in stock globally."

Google said services like Google Play and Google Play Protect would still function on existing Huawei devices. The same services, however, might not be available on future Huawei smartphones.

US stocks fell yesterday, with the S&P 500 technology sector slipping 1.95 per cent in early trading.

The US administration, which sees it as engaging in espionage in the United States on behalf of the Chinese government, has been tightening the screws on the firm, and took two actions against it last week.

Huawei was the unspecified target of the first, an executive order banning US telecommunications firms from installing foreign-made equipment that could prove a threat to national security.

The US also added Huawei and its affiliates to the Commerce Department's Entity List, banning it from doing business with US companies, and calling into question its ability to continue manufacturing.

Huawei has said that it has been preparing for the US ban and is able to ensure a steady supply of most products.

The US' latest moves cast a cloud over a potential meeting between President Donald Trump and his Chinese counterpart Xi Jinping in Japan late next month, which is seen as a critical opportunity for the two giant economies to reach a deal and wind back a damaging trade war. 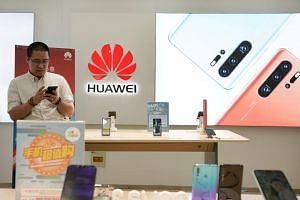 Google restricts Huawei's use of Android after Trump blacklist

"At this timing, the latest moves against Huawei are interpreted by many as additional maximum pressure to force China to sign a trade deal desired by the US," Ms Yun Sun, director of the China Programme at the Stimson Centre, told The Straits Times.

Eurasia Group founder Ian Bremmer said Mr Trump has considerably raised the stakes for the June meeting. On the other hand, nationalist sentiment in China is sure to rise further.

There remains some uncertainty as to whether the US will issue temporary licences or exemptions for American suppliers to Huawei. Last year, Mr Trump threatened another Chinese telecom company, ZTE, but relented.

With Huawei, though, there is more at stake, analysts said. If the US does not issue a general licence, it would be a major blow to the stability of one of China's most important companies, the Eurasia Group said.

"Even a less severe scenario, in which US companies are covered under a temporary licence that could be revoked at any time, would make Beijing less likely to yield on some of the core technology issues at the heart of the trade dispute," said China researchers at Eurasia Group Michael Hirson and Allison Sherlock in an e-mail.

Rosenblatt Securities analyst Ryan Koontz told Bloomberg News that Huawei "is heavily dependent on US semiconductor products and would be seriously crippled without supply of key US components".

"The extreme scenario of Huawei's telecom network unit failing would set China back many years and such a failure would have massive global telecom market implications."