Confused by all the US presidential election polls and surveys put out by news outlets and research companies?

Not sure which pollster to trust?

Take your pick at these other predictors, ones that have proven themselves (or so they claim) true over the years.

Just try to ignore the fact that one is a monkey and another is a self-styled prophet, and you might be able to catch a glimpse of who will take the White House on Wednesday morning (Nov 9, Singapore time).

Halloween is a significant holiday in the US - so significant that the sales of masks are practically an election forecast.

For retail chain Spirit Halloween, the top-selling mask has correctly predicted the winner of every presidential election for the past 20 years.

And this year, the "mask index" predicts a victory for Mr Trump, 55 per cent to 45 per cent for Mrs Clinton, reported CBS News.

The masks are made in factory Jinhua Partytime Latex Art and Crafts Factory in China before they are shipped to the US.

Even if the mask index falls flat in its prediction this year, a loss for Mr Trump would be good business, said factory sales manager Forbes Yang.

And it would be all the better if a losing Mr Trump runs for the presidency again in another four years.

Geda the monkey correctly predicted the winner of the European Championship football final earlier this year, and might just do the same for the US presidential elections. 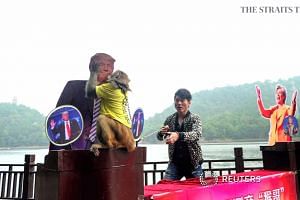 The 'king of prophets', Geda the monkey tips Donald Trump for US presidency

The five-year-old simian seer is dubbed the "king of prophets" and is purportedly psychic.

Bananas were placed beside life-sized cut-outs of both presidential candidates, and Geda chose Mr Trump after "deliberate thought", said Shiyanhu Ecological Tourism Park on Thursday (Nov 3) in a statement on its website.

Geda, whose name means knots or goosebumps, had earlier predicted Portugal would win the 2016 European football championship in July.

The Nigerian preacher and televangelist did not name Mrs Clinton, but identified a woman as the new president in a Facebook post published on Sunday (Nov 6).

Mr T.B. Joshua, whose full name is Mr Temitope Balogun Joshua, said it will be a "narrow win" and that the person will face many challenges in the White House, including attempts to pass a vote of no confidence on the presidency.

"The boat of the new President will be rocked," he wrote before ending off: "By the way, in order not to keep you in suspense, what I frankly saw is a woman."

Mr Joshua is a self-proclaimed prophet, and he claims to have predicted the disappearance of the Malaysian Airlines plane MH370.

He also claimed his water could heal the Ebola virus, and reportedly sent 4,000 bottles as part of an aid package to Sierra Leone by private jet.

Students at Benjamin Franklin Elementary School have correctly predicted the winner of presidential elections for 48 years.

They do so by voting for the two candidates - without knowing their names or personalities.

Instead, the candidates are only known as Candidate A and Candidate B.

The students, aged between five and 10 years old, side on either candidate based on issues, facts and policies.

After the teacher reveals the identity of the candidates, the students step into a voting booth to write down the name of their choice candidate.

This year, Mrs Clinton won with 52 per cent of the votes, compared with 43 per cent for Mr Trump.

Do not underestimate the predictive power of the sale of $3 plastic drinking cups - these presidential cups, etched with either candidates' campaign logos, have been a reliable forecast for the outcome of three presidential elections so far.

At least that is the case for a shop in East Hampton, New York, called the Monogram Shop, according to a report by The New York Times.

Owner Valerie Smith has been keeping count of the number of cups sold since the primary contests in March.

But by July 17, Mrs Clinton caught up in the cup sales. "Since then, she has, in a very Hillary-like way, doggedly, slowly, cup by cup, pulled ahead," Ms Smith told The New York Times.

"She didn't meteorically sell tons and tons of cups. It's been a gradual widening."