PUERTO VALLARTA, Mexico (REUTERS) - The wealthy Texas teenager who fled with his mother to Mexico avoided an ostentatious lifestyle in the pair's last days at a beach getaway full of hotels, restaurants and bars popular with American tourists, according to people who saw them.

The fugitive pair opted for a modest apartment, kept a low profile, and the mother at least once used a false name as they tried to stay under the radar in the Pacific resort of Puerto Vallarta, locals and neighbours said.

Ethan Couch, 18, and his mother Tonya, 48, were seen checking out prices at a nearby butcher's shop, eating at a restaurant that typically serves locals, and were spotted walking a dog during the brief period they lived in the two-bedroom second-floor apartment.

Sightings of the mother and son were mostly fleeting, but when shown recently published photos, several people said they recognised the pair.

"She was very normal, very calm, she didn't talk much," said Mr Ramon Hernandez, a waiter who twice served the mother food.

Couch and his mother fled to Mexico as the US authorities investigated a possible violation of the probation deal that had kept him out of prison for a 2013 drink-driving crash that killed four people. They were arrested on Monday evening.

Couch became known as the "affluenza" teen during his trial in juvenile court. A psychologist said that he was so wealthy and spoiled he could not distinguish between right and wrong.

Convicted on four manslaughter counts, Couch was sentenced to 10 years drug-and-alcohol-free probation, a punishment critics saw as far too lenient.

Texas police said on Tuesday the two planned to "disappear" when they fled after throwing what Tarrant County Sheriff Dee Anderson described as something resembling a "going-away party."

The two were due to be deported from Mexico on Wednesday, but delayed that by filing an injunction against extradition, a Mexican official said. 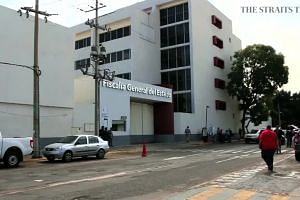 Texas ‘affluenza’ teen and his mother block extradition from Mexico

'ALISHA' AT THE LAUNDROMAT

By the time they were arrested, they were using fake names, one witness said. Early on Monday afternoon, Tonya Couch walked into a local laundromat and dropped off a bag of clothes, giving her name as "Alisha", owner Lupita Curiel said.

The name aroused Curiel's suspicion because she hesitated slightly before saying it - and it was the same name given by the person ahead of Couch in the line, she said. She also left an incomplete phone number, she added.

Both the name "Alisha" and the invalid six-digit number were visible on the ticket left at the laundromat, where the bag of washed and folded clothes sat on the shelf near the entrance.

It was not clear if they had lived in a similar way while in the bungalow, whose location was still undisclosed.

Four people staying in the apartment building at 1030 Avenida Colombia on the street where Ethan and Tonya Couch were detained reported seeing them there. Though only a few blocks from the beach, the area lacks visible tourist trappings.

Among those who saw them was a tenant barber who gave only his first name, Carlos, and who said the building's owner had told him that the mother and son had spent four days in the same apartment he himself had previously rented at a cost of around 6,000 pesos (S$500) a month.

The owner, identified by tenants as Mr Guillermo Quiroga, could not be reached for comment.

At least half a dozen people saw the Couches walking a dog described as a German Shepherd cross, which some also saw standing on the balcony of the apartment.

Two people also said they saw the pair bringing an order of Domino's Pizza back to the apartment.

Carlos showed a photo he took on his phone of Ethan Couch being escorted into a waiting truck by plain-clothes police outside the building.

Ms Carmen Rodriguez, a cook at a no-frills restaurant about a block away from the apartment, said she had twice served the pair breakfast for about 40 pesos each. The restaurant mainly caters to locals, she said, which meant the two stood out.

"When I saw him he had lighter hair," she said. "I think he's just had it coloured because he didn't look like that."