WASHINGTON (WASHINGTON POST) - Mr Jimmy Carter - the 39th president of the United States - has recently celebrated multiple record-breaking milestones: The 40th anniversary of his inauguration was in 2017, and in October, he joined Mr George H.W. Bush as the only other president to reach 94.

On Friday, at the age of 94 years and 172 days, Mr Carter reached a new milestone, becoming the longest-living president in US history.

He did so despite thinking he was on the verge of death just a few years earlier, after doctors discovered that cancer had spread to his brain.

True to form for the low-key former chief executive, however, "there are no special celebrations planned," his spokeswoman said.

Born on Oct 1, 1924, in Plains, Georgia, the typically cheery and humble former Navy lieutenant has had a life of service. Before taking office as president, he served as a state senator in Georgia and as governor.

His presidency - remembered for the Camp David accords, the Iran hostage crisis and creation of the Departments of Energy and Education - flamed out during the election of 1980, when Mr Ronald Reagan defeated him.

After leaving the White House in 1981, Mr Carter, then 56, and his wife, Rosalynn, returned to their hometown in southern Georgia. Yet another distinction: Mr Carter has been an ex-president longer than anybody in American history. 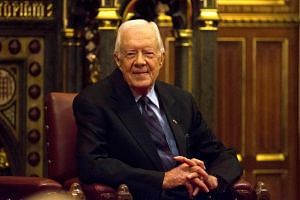 He remains engaged in the causes and activities that matter most, according to the Carter Centre's director of communications, Ms Deanna Congileo: He participates in Carter Centre programs in global peace and health and annual Habitat for Humanity builds, and he received the Nobel Peace Prize in 2002, for work during and after his time in office.

"Both President and Mrs Carter are determined to use their influence for as long as they can to make the world a better place. Their tireless resolve and heart have helped to improve life for millions of the world's poorest people," Ms Congileo wrote in an e-mail to The Washington Post.

In 2015, Mr Carter announced doctors had discovered a form of melanoma that spread to his brain.

"I just thought I had a few weeks left, but I was surprisingly at ease," Mr Carter said at a news conference that August. "I've had an exciting and adventurous and gratifying existence."

Mr Carter says he takes pride in having "always told the truth".

He also says he is proud that former secretary of state Hillary Clinton and Senator Bernie Sanders, a Vermont Independent, "comported themselves with dignity, talked about issues that matter and presented a vision for our nation" during the 2016 presidential election.

Still, thinking back on more than 40 years, Mr Carter told The Washington Post in August that he "regrets not doing more to unify the Democratic Party".

His 2016 message to the younger generation of voters was: "Stay engaged. Stay involved. And be sure to vote."