The e-mails, dating to January 2016, were sought by the office of Mr Robert Mueller, the special counsel conducting the Russia investigation, the documents show.

Hundreds of pages of documents about the inquiry into Cohen were released in response to a request by The New York Times and other news organisations.

Mr Lanny J. Davis, a lawyer for Michael Cohen, said in a statement on Monday night that the release furthered Cohen's "interest in continuing to cooperate and providing information and the truth about Donald Trump and the Trump organisation to law enforcement and Congress".

The materials that were unsealed on Tuesday came from FBI searches in April on Cohen's office, apartment, hotel room and a safe deposit box.

Among the documents seized in the search were papers recovered from a shredder and electronic files contained on a series of cellphone, iPads and computers.

Late last year, Cohen pleaded guilty to violating campaign finance laws, financial crimes and lying to Congress in two separate prosecutions, one filed by the US attorney's office for the Southern District of New York and the other by Mr Mueller's office. 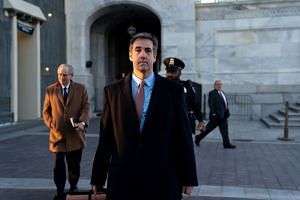 Cohen, 52, apologised at his sentencing in December, blaming himself for "my own weakness and a blind loyalty" to Mr Trump that he said had led him "to choose a path of darkness over light".

Judge William Pauley sentenced Cohen to three years in prison. He is scheduled to begin serving his sentence on May 6 after Pauley granted him a two-month delay in his surrender date because of pending shoulder surgery and his need to prepare for testimony before three congressional committees.

Cohen testified on Feb 27 in a day-long public hearing before the House Oversight and Reform Committee about what he described as Mr Trump's lies about his business interests in Russia and his role in the payment of hush money to an adult film actress who claimed to have had an affair with Mr Trump.

Cohen called the President a racist, a con man and a cheat.

The search materials were made public at the order of Judge Pauley. Last fall, when The Times and other news organisations asked the judge to unseal the materials, the government opposed such action.

Prosecutors cited the "need to protect an ongoing law enforcement investigation" and the privacy of "numerous uncharged third parties".

Judge Pauley, in a 30-page opinion on Feb 7, made clear why he thought some materials could be released while others had to remain sealed for now.

"At this stage," the judge wrote, "wholesale disclosure of the materials would reveal the scope and direction of the government's ongoing investigation", the subjects of the inquiry and the potential conduct under scrutiny and other sensitive issues.

But Judge Pauley approved the release of information related to Cohen's charges for tax evasion and false statements to financial institutions, as well as conduct by Cohen that did not result in criminal charges.

Judge Pauley ultimately ordered the government to provide him with a copy of the sealed materials and proposed redactions.

On Monday, after saying he had reviewed and approved the relations, he ordered the government to file the redacted copy on the public court docket.

The judge also said he would revisit the documents' secrecy in the near future, directing prosecutors to provide him with a confidential update by May 15.