WASHINGTON (NY TIMES) - During his surprise comedy skit at the Emmys on Sunday (Sept 17), Sean Spicer may have made light of his six-month tenure as the White House press secretary, but a message was also embedded in his performance.

In an interview Monday morning, Spicer said he now regrets one of his most infamous moments as press secretary: his decision to charge into the White House briefing room in January and criticise accurate news reports that Barack Obama's inauguration crowd was bigger than President Donald Trump's.

"Of course I do, absolutely," Spicer said.

Spicer, who resigned this summer after repeated clashes with the news media and a sharp disagreement with Trump over the appointment of Anthony Scaramucci as communications director, used the Emmys to make fun of himself. But Spicer was also using the Emmys to burnish his image before a television industry audience that he may need to cultivate as he seeks speaking engagements and paid television appearances in his post-White House life.

Spicer's arrival on the Emmys stage garnered mixed reviews - not so much for his star turn with Stephen Colbert of The Late Show on CBS, but for Hollywood's sudden embrace of a man once viewed as a not-so-truthful mouthpiece for a president that much of the town despises.

As Spicer prepared to return to Washington, he was asked if he was worried about Trump taking offence over the skit - which many viewers saw as lampooning the president's preoccupation with the size of his inauguration crowd.

"I certainly hope not," Spicer said after a brief pause. "This was an attempt to poke a little fun at myself and add a little bit of levity to the event." 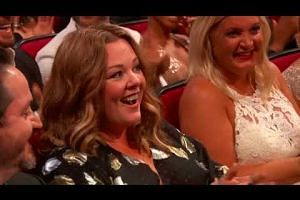 Spicer made his Emmys appearance at the end of Colbert's opening monologue, which included a long riff about Trump's uneasy relationship with the entertainment industry and his apparent frustration that his NBC reality series The Apprentice never won an Emmy Award.

Colbert, a frequent critic of both Trump and Spicer, went on to say that the president was primarily concerned with TV ratings, but that there was no way to know how large his audience was.

Colbert asked, "Sean, do you know?" At that point, Spicer shot out of the wings - pushing a podium similar to the one immortalised by Melissa McCarthy in her impersonation of him on Saturday Night Live. He recited his briefing room statement, nearly word for word. "This will be the largest audience to witness an Emmys, period - both in person and around the world," he declared with a semi-straight face.

Laughter and applause could be heard throughout the Microsoft Theater, and celebrities in the audience were seen on the telecast, reacting with their mouths agape.

Spicer said he didn't give the president or senior White House staff a heads-up about his appearance, which had been in the works for several days.

In fact, virtually no one knew about it. According to Spicer, Colbert suggested the idea himself, and passed it to the former press secretary through his producer at CBS, who had gotten to know Spicer well years earlier when he was a producer on MSNBC's Morning Joe.

When Spicer and his wife left Washington for LA on Saturday morning, he donned a disguise. He wouldn't say what it was, though a friend of his hinted that it might have included fake facial hair.

After checking in, he stayed in his hotel room, leaving only for a walk-through that took place after the hall had been cleared. When scripts were handed out to crew members and performers, his name was nowhere to be found - replaced by an innocuous surname that began with the letter "S."

A person familiar with the planning of the Emmy program said Monday that Colbert and his staff regarded Spicer's appearance as both a joke at the expense of Trump and a way to poke fun at Colbert, too. The person spoke on condition of anonymity to disclose private discussions involving the Emmys and Colbert.

Since leaving the White House last month, Spicer has been on a speaking and television circuit - trying to rehabilitate his image. On Wednesday, he appeared as a guest on the ABC late-night show Jimmy Kimmel Live, in an interview that drew criticism for its perceived leniency toward Spicer.

When Kimmel brought up the news conference where Spicer had talked about inaugural crowd sizes, Spicer answered: "I'm aware. I appreciate the reminder of how it went down." The next day, Colbert was a guest on Jimmy Kimmel Live, and the two talk show hosts talked about Spicer.

"I've always wanted to talk to that cat," Colbert said.

Kimmel said: "A certain part of me felt sorry for him." Colbert replied, "Really? 'Cause he wasn't apologising. He wants to be forgiven, but he won't regret anything he did. You got to regret something you did to be forgiven."

But at least among some people in Hollywood, Spicer may have been forgiven - or at least worthy of an Instagram.

At the Television Academy's Emmy after-party in Los Angeles, several gown- and tuxedo-clad revellers stopped to gawk at Spicer.

Other guests patiently lined up nearby - Spicer was posing for selfies.