PARKLAND (WASHINGTON POST) - Police on Thursday (Feb 15) vowed to make sure that “justice is served” after a gunman wielding an assault-style rifle killed 17 people at a high school here, even as they sought to piece together what could have motivated one of the country’s deadliest school shootings.

A day after the shooting rampage, authorities had not publicly announced a motivation for the carnage, but they were digging into elements of the suspected gunman’s troubled past, including a pattern of disciplinary issues and unnerving behaviour.

Also on Thursday, FBI investigators were pursuing information suggesting that Nikolas Cruz, the 19-year-old suspect charged with the shooting, might have been associated with a Florida-based white supremacist group. But agents were still trying to determine the extent of his involvement with the group, if any, according to a law enforcement official who asked not to be identified discussing an ongoing investigation.

It was not immediately clear what connection there may be between the shooting rampage and Cruz’s possible connections to the group.

The Anti-Defamation League reported on Thursday that a spokesman for the white supremacist group said Cruz participated in some of their training exercises. The spokesman told the ADL that the group did not order or want Cruz to carry out any attack like the school rampage. The Washington Post was not immediately able to reach several of the group’s members on Thursday.

This information came as police have sought to explain the massacre at a South Florida high school on Valentine’s Day. Authorities have described a chilling level of preparation, saying that the gunman wielded an assault-style weapon and carried extra ammunition when he sought to lure students into the hallways of Marjory Stoneman Douglas High School on Wednesday.

What unfolded was another war zone erupting in a quiet suburban community, as a city known more for its sprawling homes and bucolic parks was transformed by a hail of bullets and a torrent of anguish.

In the aftermath, investigators have sifted through the background of Cruz, who had been expelled from the same school now turned into a crime scene. He had a history of disciplinary issues and a fascination with guns, people who knew him said.

Early on Thursday, Cruz was booked on 17 counts of “murder premeditated.” He briefly appeared in court on Thursday and was ordered held without bond. Broward County Sheriff Scott Israel vowed that law enforcement officials would make sure Cruz was convicted on all charges.

Israel said that police have identified all of the victims and planned to release their names later in the day. Some were students, but at least one staff member – a beloved football coach who had attended the school before returning to work there – was among the dead. 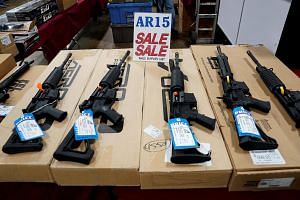 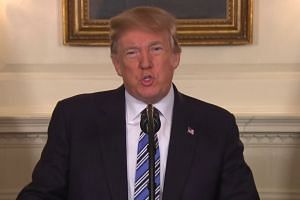 The coach, Aaron Feis, was shot after throwing himself in front of students, the school’s football team said on Twitter, writing that he had “selflessly shielded students from the shooter” and “died a hero.”

In addition to the 17 killed in the school and outside, another 15 were wounded, authorities said. Three of those remained in critical condition on Thursday, while some others were still hospitalised.

Israel said it was “a pretty good assumption” that the shooter had unspecified mental-health issues. But while school officials, students and others who knew him had sensed that something was off with Cruz, none of that was enough to stop the teenager from purchasing the gun officials said was used in the attack.

Cruz bought the AR-15 himself legally, and so far it is the only gun authorities have recovered as part of the investigation, said Peter Forcelli, special agent in charge of the Miami field division of the Bureau of Alcohol, Tobacco, Firearms and Explosives.

In his social media postings, Cruz has been seen wielding other firearms, so officials continue looking for any additional weapons, but they have not found any so far, Forcelli said in an interview on Thursday morning. Investigators are also reaching out to gun shops across the region to see if Cruz had attempted to buy other weapons.

Federal authorities were looking on Thursday into whether Cruz had come up on their radar before. The FBI said that agents investigated a comment on YouTube last year that threatened a school shooting but were unable to identify the person who posted it.

“The comment simply said, ‘I’m going to be a professional school shooter,’” Robert Lasky, special agent in charge of the FBI’s Miami division, said at the news briefing Thursday. “No other information was included in that comment.”

Lasky spoke after BuzzFeed News reported that a YouTube user had contacted the bureau after seeing someone with Cruz’s name post that same message.

Lasky said that authorities, who investigated the comment last year and were looking at it again after the Parkland shooting, still do not know if the comment was posted by Cruz.

The tip to the FBI came in the fall of 2017, but when agents checked the name Nikolas Cruz against their internal databases, they could find no other derogatory information on him, according to a law enforcement official familiar with the investigation.

Without anything else to go on, officials felt there wasn’t enough of a legal justification to issue a subpoena to YouTube for the underlying information about that particular account-holder, the official said.

Since being taken into custody, Cruz has made statements to police, according to the official, who declined to elaborate.

According to police, Cruz fired upon students outside and inside the school before trying to blend in with those who were fleeing the carnage. Israel said on Thursday that there was an armed school resource officer on the Douglas campus when the shooting occurred, but “he never encountered Cruz.”

Cruz was taken into custody in nearby Coral Springs, not far from the school. A police officer from Coconut Creek, another nearby city, was driving down a residential street when he saw what looked like any other teenager walking down the road.

“He looked like a typical high school student,” officer Michael Leonard told reporters on Thursday. “And for a quick moment I thought, could this be the person, is this who I need to stop?”

The teenager was wearing clothes that matched the description broadcast over the police radio, Leonard said, so his training kicked in and he pulled over. Cruz complied with Leonard’s orders and was taken into custody without any problems, the officer said.

The bloodshed inside Douglas, which would remain closed at least through the rest of the week, was staggering even for veteran law enforcement professionals. Forcelli, a homicide detective in New York before he joined ATF, described what he saw as particularly horrifying.

“This is a bad crime scene,” said Forcelli, who was at the school for hours on Wednesday. “I’ve seen plenty of dead bodies. Seeing kids, defenceless kids, piled up, it weighs on you... I can’t imagine the pain the families have. There’s a lot of victims here.”

In televised remarks at the White House, President Donald Trump pledged that his administration would help “tackle the difficult issue of mental health” and said the issue of improving safety in schools would be the top priority during a meeting later this month with governors and state attorneys-general.

Even as the shooting was followed with questions about whether the country would revisit its gun control laws, Trump, much like Republican Florida Governor Rick Scott when he spoke earlier near the shooting scene, made no mention of that issue. Both officials instead stressed the importance of focusing on mental health in response to Florida’s third mass shooting in as many years.

Former President Barack Obama, who frequently had to address a nation rocked by mass violence during his time in office, wrote on Twitter that “we are not powerless” and called for “long overdue, common-sense gun safety laws.”

Israel, the sheriff, said the shooting was “catastrophic.” He also warned of copycat threats made at other schools in the area. His officers responded to a report of a shooting at another school in the county, and while no threat was found, one of those deputies accidentally fired his own weapon and injured his leg.

The threat spoke to the tension still lingering across South Florida as it became the latest region to grapple with a seemingly endless procession of shooting rampages that have cut down Americans in their schools, churches, offices and movie theaters.

Possible red flags in the suspected shooter’s life began to emerge in the hours after he was identified. An Instagram account that appeared to belong to him showed several photos of guns. One appeared to show a gun’s holographic laser sight pointed at a neighbourhood street. A second showed at least six rifles and handguns laid out on a bed with the caption “arsenal.”

Other pictures showed a box of large-caliber rounds with the caption “cost me $30.” One of the most disturbing appeared to show a dead frog’s bloodied corpse.

Cruz and a half brother were adopted as babies by Lynda and Roger Cruz, according to a relative in New York. Roger died years ago and Lynda died last fall, the relative said. Around Thanksgiving, Nikolas Cruz moved in with the family of a friend from Stoneman Douglas High School, said Jim Lewis, an attorney representing the family.

Lewis said Cruz already owned the AR-15 rifle when he moved in with the family. “It was his gun... It was secured in a gun cabinet in the house, but he had the key to it,” Lewis said.

Cruz was enrolled in a programme to obtain a GED, Lewis said. But on Wednesday, he didn’t attend it, telling the family something to the effect of “I don’t go to school on Valentine’s Day,” Lewis said.

After the massacre, Ryan Gutierrez, 18, a senior, left Douglas and walked two miles to a 7-Eleven in Coral Springs – the nearest spot where his parents could meet him. Police cars blocked every other road leading to the school.

His parents had already been reunited with his sister, Nicole, a freshman at the school. As Gutierrez approached, his mom ran up, hugged him hard and started crying. Gutierrez held her tight, comforting her. His father came up and hugged them both.

“This has been so horrible, the most horrible day anyone can imagine,” Gutierrez’s mother, Diana Gutierrez, said, trying to stop her tears. “It’s unreal, just unreal. I still don’t believe it. You don’t think it will ever happen to you and your children.”