Final passage of the Bill by the legislature on Wednesday came three weeks to the day after a gunman opened fire with a semiautomatic assault-style rifle at Marjory Stoneman Douglas High School Public in Parkland, Florida, killing 14 students and three faculty members.

Swift action in the Republican-controlled statehouse, where the National Rifle Association (NRA) has long held sway, was propelled in large part by an extraordinary lobbying campaign by young survivors from the massacre and parents of the victims.

Gun control advocates said the Parkland massacre and the response to it by Florida lawmakers signaled a likely turning point in the national debate over firearms safety and the right to bear arms as enshrined in the Second Amendment of the US Constitution.

“Today should serve as an example to the entire country that government can and must move fast,” Scott, a Republican, said in remarks before the signing, surrounded by survivors of the shooting and their families. He said the Bill represented a compromise balancing concerns on both sides of the gun debate.

Student survivors from the Parkland shooting had lobbied for some of the new restrictions adopted in the Bill, over NRA objections.

But the legislature rejected one of the students’ chief demands: an outright ban on semi-automatic assault-style rifles. 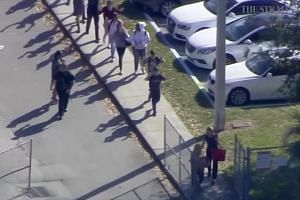 Among the most scrutinised measures of the new law is a provision allowing school staff to volunteer to be trained and armed as “guardians” against future gun violence, while giving local sheriffs and individual school districts the discretion of deciding whether to participate in the programme.

But legislators excluded most classroom teachers from taking part, a compromise aimed at earning the support of Democrats and Scott, who said he was opposed to arming teachers.

Critics have said permitting school staff to carry firearms on the job only heightened the risks of gun violence, and posed a particular risk to minority students, who they said were more likely to be shot in the heat of a disciplinary situation or if mistaken as an intruder.

Scott said he remained dissatisfied with the guardian provisions as adopted in the Bill but signed it nonetheless, saying it would enhance school safety overall.

“I am glad, however, that the plan in this Bill is not mandatory, which means it will be up to locally elected officials,” Scott said. “If counties don’t want to do this, they can simply say no.”