WASHINGTON (AFP) - Timothy Ray Brown, the American once known as "the Berlin patient" who in 2008 became the first person to be cured of HIV, is terminally ill with cancer, according to his partner.

"Timothy is not dying from HIV, just to be clear," his partner Tim Hoeffgen told the activist and writer Mark King, who published a blog post on the subject on Tuesday.

"HIV has not been found in his bloodstream since he was cured. That's gone. This is from the leukaemia. God, I hate cancer," added Hoeffgen.

King told AFP he had reached the couple by phone last Saturday.

Brown, 54, is receiving hospice care at his home in Palm Springs, California.

"I'm going to keep fighting until I just can not fight any more," Brown told King.

Brown made medical history and became the personification of hope for the tens of millions of people living with the virus that causes Aids when he was cured more than a decade ago.

He was studying in Berlin in 1995 when he learned he had become infected. Then, in 2006, he was diagnosed with leukaemia, or cancer that affects the blood and bone marrow.

To treat his leukaemia, his doctor at the Free University of Berlin used a stem cell transplant from a donor who had a rare genetic mutation that gave him natural resistance to HIV, hoping it may wipe out both diseases.

It took two painful and dangerous procedures, but it was a success: in 2008 Brown was declared free of the two ailments, and was initially dubbed "the Berlin Patient" at a medical conference to preserve his anonymity.

Two years later, he decided to break his silence and went on to become a public figure, giving speeches and interviews and starting his own foundation. 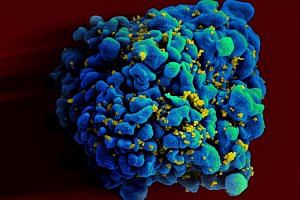 A woman may have been cured of HIV without medical treatment, study finds

"It's very wonderful, being cured of HIV."

Last year, the second-ever person was announced cured from the same method. Initially called "the London patient," he later went public, identifying himself as Adam Castillejo.