WASHINGTON (WASHINGTON POST) - Fake editions of The Washington Post claiming that President Donald Trump was leaving office were handed out on Wednesday morning (Jan 16) at multiple locations in Washington DC.

The print papers - which at a quick glance look strikingly similar to actual copies of The Post - were filled with anti-Trump stories, which also appeared on a website that mimicked the official Post site.

The Post's public relations department released a statement on Twitter: "There are fake print editions of The Washington Post being distributed around downtown DC, and we are aware of a website attempting to mimic The Post's. They are not Post products, and we are looking into this."

Under the headline "Unpresidented", the fake newspaper's lead story said that Mr Trump had left a resignation message on a napkin in the Oval Office and left Washington for Yalta, the famous Crimean resort as the site of a meeting of Allied heads of state during World War II.

The false story also reported that his abrupt departure was prompted by "massive women-led protests" around the country, suggesting that the stunt is a promotion for the planned women's march on Saturday.

It was not immediately clear who was behind the fake website and newspaper, copies of which were being handed out at locations around Washington, including outside the White House and Union Station.

Liberal activist group Code Pink posted a video on Facebook of the organisation's founder, Ms Madea Benjamin, passing out copies of the paper at what appears to be a Capitol Hill office building.

.@washingtonpost you might want to deal with the lady handing out fake copies of the Post outside Union Station. I tried to explain why this is problematic but she wasn’t having it. pic.twitter.com/pjohcCFSx7 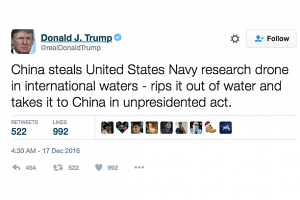 'Unpresidented' Trump tweet on China sets off deluge of mockery

In the video, Ms Benjamin tells people, "The crisis is over - Trump has left the White House."

Later, she adds, "You gotta believe in the Washington Post."

Ms Benjamin did not immediately respond to an e-mail requesting comment.

Liberal group MoveOn, which some on social media suspected of being behind the fake paper, tweeted that it was not responsible.

"While we love the headline, we didn't produce today's satirical Washington Post."