WASHINGTON (NYTIMES) - Mark Zuckerberg, Facebook's chief executive, testified before Congress on Tuesday (April 10) and will do so again on Wednesday to answer questions about the social network's failure to protect the data of millions of its users and its role in Russian interference in the 2016 presidential election.

Here are some of Zuckerberg's statements, as well as some claims from the lawmakers, which we fact checked.

1. "We made changes in 2014 that would have prevented what happened with Cambridge Analytica from happening today."

Not quite. Cambridge Analytica, a political data firm, used information that had been harvested from as many as 87 million Facebook users several years ago to build psychological profiles of voters. Facebook did announce changes in 2014 to limit the access that new apps had to data about its users, but it was not until 2015 that the company rolled out the changes to affect all of the apps on the platform.

2. When asked when Facebook learned of Russian influence operations on the social network, Zuckerberg said, "Right around the time of the 2016 election itself."

This contradicts earlier statements. Facebook has long maintained that it did not learn about how Russian agents had used its platform to influence the presidential election until the summer of 2017. While Alex Stamos, Facebook's chief information officer, warned the company that Russian hackers may have been active on the platform in the summer of 2016, he has said he was looking at cybersecurity breaches, not disinformation campaigns tied to the elections.

Tuesday was the first time that Zuckerberg cited 2016 as the date when the company identified new operations linked to the election.

This is true, but … Facebook requires people to register for accounts with their real names. But the fact is that fake accounts and false pages have persisted on the social network.

Russian agents set up accounts on Facebook with false identities before the 2016 presidential election. And just this week, Facebook removed a popular Black Lives Matter page after it was discovered to be inauthentic.

4. "Cambridge Analytica wasn't using our services in 2015 as far as we can tell."

False. Former employees of Cambridge Analytica have told The New York Times that they were using Facebook as early as 2014. Zuckerberg later said he had misspoken.

This is true, but … During the hearing, Zuckerberg was shown the terms of service of the quiz app that Alexander Kogan, a Russian-American academic, used to gather data from Facebook users. The fine print may have told users their data could be used for commercial purposes, according to a draft of the app's terms of service that was reviewed by The Times, and which was shown to Zuckerberg by Senator Richard Blumenthal.

In other words, it appears that Facebook may not have regularly checked to make sure that apps complied with its rules.

The final wording of the terms of service for Kogan's app is now most likely unknowable. Facebook executives said they deleted the app in December 2015 after they found out about the data harvesting.

6. When asked whether Facebook users and their friends had knowingly consented to sharing their data with Kogan's app, Zuckerberg said, "I believe that we rolled out this developer platform and that we explained to people how it worked and they did consent to it."

Not exactly. Facebook users who downloaded Kogan's quiz app did consent to sharing their own and their friends' information by agreeing to the app's terms and conditions. But their friends were not aware that their information had been shared and did not knowingly grant permission.

And notices in fine print are often ignored or misunderstood. Several people who used the app told The Times that they were not aware that it had harvested their data. Studies and surveys have shown that most people click agree to terms and conditions without actually reading them. 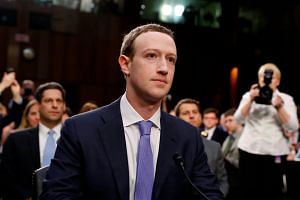 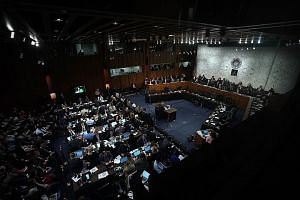 7. "President Obama's campaign developed an app utilising the same Facebook feature as Cambridge Analytica to capture the information of not just millions of the app's users but millions of their friends." - Senator Chuck Grassley

This comparison is misleading. More than 1 million people downloaded the 2012 Obama campaign's app, which gained access to the data of supporters and their friends. Facebook users who downloaded the Obama campaign app were aware of its aims: supporting and campaigning for a political candidate.

Those who downloaded the app from Kogan, however, believed they were taking a personality quiz for academic purposes and did not know that their data would end up in the hands of Cambridge Analytica.

8. "Contrast that, for example, with an area like finding terrorist propaganda, which we've actually been very successful at deploying AI tools on already."

This requires context. How successful Facebook has been at finding and eliminating terrorist propaganda from its platform is still up for debate. Facebook and other social media companies were chastised by the British Parliament in a 2017 report for "failing to remove illegal content when asked to do so - including dangerous terrorist recruitment material, promotion of sexual abuse of children and incitement to racial hatred." The report called the companies' lack of enforcement shameful.

Last week, the Counter Extremism Project, a nonprofit that combats extremist groups, also said it had found accounts of some extremists that remained active on Facebook.

9. "In May of 2016, Gizmodo reported Facebook had purposefully and routinely suppressed conservative stories from trending news." - Senator Ted Cruz

This requires context. A former Facebook employee told Gizmodo in 2016 that people working at the social network prevented stories about right-wing conferences and candidates from trending on Facebook.

Other former employees disputed this suggestion and Gizmodo said it was "unable to determine if left-wing news topics or sources were similarly suppressed." Facebook denied the allegations at the time, but the episode underscored the question whether the social network was a media entity.

10. "We already have a 'Download Your Information' tool that allows people to see and take out all the information they've put into Facebook."

Not exactly. While Facebook recently introduced a tool that allows people to download data that Facebook has collected on them, the tool appears to be incomplete. Some people have noticed that some data are missing, such as a long-forgotten feature of Facebook that lets you "poke" people.

Facebook now allows users to opt-out of certain categories of data, including deciding what is shared with advertisers. But certain basic data will always be shared with the company unless a Facebook account is permanently deleted by the user.

11. "I don't believe we've ever collected the content of phone calls."

This is true, but … While Facebook doesn't collect the content of phone calls, it has been collecting call records and SMS data from Android devices that have the Facebook app installed.

Android users who recently downloaded the data that Facebook stores about them were surprised to learn the company had information on their entire call history, going back years. Facebook recently explained in a blog post that users can opt out of Facebook collecting this data.