SAN FRANCISCO/HONG KONG • Facebook has found itself entangled in yet another political spat - this time with China, a market the social media giant is seeking to enter.

Police in Hong Kong, a semi-autonomous territory of China, have asked the company to remove the official page of the pro-independence Hong Kong National Party, which was slapped with an unprecedented government ban this week.

The prohibition would result in fines and imprisonment for those aiding the group.

Hong Kong officials made their request of Facebook after the measure was announced on Monday, according to the South China Morning Post (SCMP).

The move to ban the party, which the government calls a risk to national security, is fuelling concerns that Hong Kong's administration wants to set a precedent for clamping down on opposition groups, eroding the city's autonomy under the "one country, two systems" framework that has been in place since Chinese rule began in 1997.

The request also puts the California-based social media company in a difficult position as a refusal could hamper any future efforts to expand in China.

While China censors media outlets and bans Facebook, Twitter and Alphabet's Google in the mainland, Hong Kong has relatively fewer restrictions on the press and the Internet.

Hong Kong police declined to comment on the SCMP report, but said they would observe and collect evidence in accordance with the law and take appropriate enforcement actions based on the circumstances. 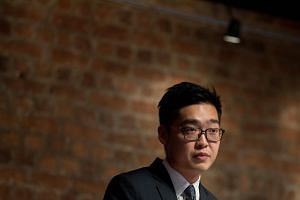 A Facebook spokesman did not immediately respond to a request for comment. It was not clear whether Hong Kong police asked Twitter or Google's YouTube to remove the party's official pages from their sites.

Party leader Andy Chan declined to comment, adding that he had not used the party's Facebook page since the party was banned. "I am going to call a press conference soon and I will answer all your questions then," he said. He indicated he would use his personal Facebook page to announce the date.

Hong Kong's request also comes at a fraught moment for Facebook, which has dealt with waves of criticism in the United States and Europe over its handling of political content. Following reports of Russian meddling in the 2016 US presidential elections, Facebook and other tech companies have faced mounting scrutiny over content moderation decisions.

Facebook may be keen to avoid inflaming tensions in China. Earlier this year, its attempt to open an "innovation hub" in the country was blocked.

In China, the ruling Communist Party views any comments on Hong Kong's affairs by foreign governments as an infringement of its own sovereignty.

"Certain countries and institutions have made irresponsible remarks on the Hong Kong SAR government's ban on the operation of the Hong Kong National Party," Chinese Foreign Ministry spokesman Geng Shuang said on Tuesday.

Hong Kong's push to ban the party immediately drew criticism from US officials. US State Department spokesman Heather Nauert responded with a tweet on behalf of Secretary of State Michael Pompeo. "We are concerned by the #HongKong Government's decision to ban the Hong Kong National Party," it said.

A version of this article appeared in the print edition of The Straits Times on September 27, 2018, with the headline 'Facebook in political spat over HK party'. Subscribe
Topics:
More
Whatsapp Linkedin FB Messenger Telegram Reddit WeChat Pinterest Print Copy permalink