SAN FRANCISCO (AFP) - Facebook blamed a "server configuration change" on Thursday (March 14) for a massive outage affecting its applications around the world and brought fresh attention to the embattled social networking leader.

The outage affected users for some 12 hours in most areas of the world, with the biggest impact in North America and Europe, according to the tracking website downdetector.com.

After acknowledging the problem Wednesday, Facebook remained mum on the issue for nearly 24 hours before issuing an explanation and apology around 1630 GMT Thursday (12.30am on Friday, Singapore time).

"Yesterday, as a result of a server configuration change, many people had trouble accessing our apps and services," a Facebook tweet said.

"We've now resolved the issues and our systems are recovering. We're very sorry for the inconvenience and appreciate everyone's patience."

The outage was believed to be the worst ever for the Internet giant that reaches an estimated 2.7 billion people with its core social network, Instagram and messaging applications.

On Wednesday, Facebook said the situation did not appear to be the result of a denial-of-service attack. The hashtag #FacebookDown was a popular theme on Twitter.

In some cases, the apps could be accessed but would not load posts or handle messages.

In November, a Facebook outage was attributed to a server problem, and a September disruption was said to be the result of "networking issues."

While the outage continued, The New York Times reported that US prosecutors had launched a criminal investigation into the social network's practice of sharing users' data with companies without letting them know.

According to the report, a grand jury in New York has subpoenaed information from at least two major smartphone makers about such arrangements with Facebook. 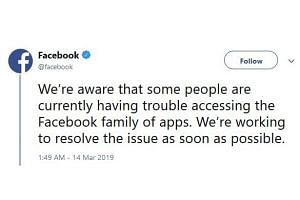 The news comes with regulators, investigators and elected officials in the US and elsewhere in the world digging into the data sharing practices of Facebook.

The social network's handling of user data has been a flashpoint for controversy since it admitted last year that Cambridge Analytica, a political consultancy which did work for Donald Trump's 2016 election campaign, used an app that may have hijacked the private details of 87 million users.

Facebook suggested there was nothing new in the New York Times report.

"It has already been reported that there are ongoing federal investigations, including by the Department of Justice," a Facebook spokesman told AFP.

"As we've said before, we are cooperating with investigators and take those probes seriously. We've provided public testimony, answered questions and pledged that we will continue to do so."

Facebook has maintained that it shared limited amounts of user data with smartphone makers and other outside partners to enable its services to work well on devices or with applications.

Regulators, and now prosecutors, appear intent on determining whether this was done in ways that let users know what was happening and protected privacy.

Over the past year, the social network has announced a series of moves to tighten handling of data, including eliminating most of its data-sharing partnerships with outside companies.