Anyone wanting to be the president of the United States starts with a map and a calculator. The simple aim: Find a path to secure enough states to get 270 votes in the electoral college system. That does not always mean winning more states or even a national majority of the votes. What it means is that candidates need to win the right ones. As the campaign for the presidential election next year hots up, The Straits Times takes you to the key states to help you understand what the state of play is for the election and what issues will likely determine who gets to the Oval Office.

About 100 people crowded into a small office space just off the busiest street in Manchester, sweating in the summer heat as they await the arrival of Senator Rand Paul.

When the senator turns up, he squeezes through the crowd to the front of the room, stands on a chair and starts speaking.

The entire party then shuffles out to a parking lot behind the building so the candidate can shake hands and pose for photos with supporters. Security is very low-key.

The apparent lack of fuss is not unique to Mr Paul’s operation. This is simply how New Hampshire conducts its politics. Recent months have featured a strong field of high-profile candidates participating in low-key events. Former secretary of state Hillary Clinton recently met voters up close in two informal sessions, one at a brewery and another at a community college; former Florida governor Jeb Bush tucked into a blueberry pie with a small crowd at an event called Politics And Pies; while businessman Donald Trump spoke at a gathering around a backyard pool in Manchester.

While residents elsewhere say they hardly ever meet their politicians, the people of New Hampshire are used to a lot of face-time with their candidates.

It is a place you come to demonstrate your abilities as a candidate to other people in your party... You are talking to votersandsmall business owners, but you are also auditioning for major campaign donors or people who are issue activists.

More so than in other states in the US, retail politics matters here. It comes down to the fact that the state is small – and thus manageable for campaigns – and holds an oversized importance in the presidential race, given its status as the first state to hold a primary election. Nicknamed the Granite State for its now fading granite industry, New Hampshire is where political parties get an early indication of how viable their candidates are for the Oval Office.

“We are past the days when no one who had lost New Hampshire ever got elected president, but it has become a proving ground for candidates,” says Dr Chris Galdieri from the New Hampshire Institute of Politics at Saint Anselm College.

“It is a place you come to demonstrate your abilities as a candidate to other people in your party... You are talking to voters and small business owners, but you are also auditioning for major campaign donors or people who are issue activists.”

Although Iowa holds the first caucus, New Hampshire maintains it is a better barometer of the nation’s mood. Unlike in Iowa,where Democrats and Republicans gather at lengthy rallies before casting a vote for their choice, the primaries in New Hampshire have a closer resemblance to an actual election.

Independents get to take part and all anyone has to do is simply turn up, vote and go home.

And while winning New Hampshire will not necessarily guarantee any candidate the nomination, losing badly can kill momentum and cause funding to dry up.

In a race that looks set to include 19 candidates on the Republican side, the outcome of New Hampshire’s vote next February might determine the fate of several candidates. Like Iowa, though, New Hampshire is often criticised for being unrepresentative of the US and therefore undeserving of its oversized role in electoral politics.

It does not have the same agriculture base as Iowa, but the state is over 90 per cent white and has a poverty rate that is half the national average. The scenic, tree-covered state also does not have the same urban centres that other states do. The state is a collection of quaint little towns. Its largest city, Manchester, has a population of just over 100,000. Parking is not a problem.

Candidates see the state as one where anyone has a chance. New Hampshire has a large chunk of independents and is considered a swing state in elections, having voted for Republican and Democratic presidents in recent years.

And it goes further than that. The state motto is “Live free or die”, a nod to the state’s libertarian tendencies but many here are also socially liberal. New Hampshire recognises gay marriage.

Their emphasis on retail politics is in part driven by how many elected representatives the state has.

Indeed, state representatives here seem to carry themselves differently from those in other states. For instance, Mr Erik Corbett, 35, who ran unsuccessfully against a long-time incumbent state representative last year, has a rather unusual choice for a campaign location. The resident of the small town of Hart’s Location in central New Hampshire calls it “stumping at the dump”.

“We don’t have trash pick-up in little towns like this, so everybody has to take their trash to the dump. So that is one place where you know you are going to see a good number of voters.” 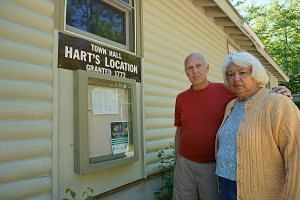 Small town in race to be first to vote

Mr Corbett, like so many others in New Hampshire, works in tourism, the main economic activity. Visitors go to New Hampshire for its beaches as well as for its lakes and ski slopes inland.

Ask the people around the state how many candidates they have met and one begins to realise just how pervasive politics is here.

Mr Peter Egelston, 56, president and owner of the small Smuttynose brewery that Mrs Clinton visited, said it is not unusual for him to bump into representatives while just walking around town.

“As a business owner, if there is an issue that is important to me and it merits some kind of Bill submitted, I can call up my state senator or state representative, invite them out to coffee, talk about the issue and see if I can get them interested in taking it through,” he told The Straits Times.

Over at the Red Arrow diner in downtown Manchester, every seat has a little plaque indicating that a famous person has sat there before.

The diner has a tradition of ringing a bell – something they call the Virgin Bell – each time a candidate visits for the first time.

Ultimately, all of it adds up to a state where people take their politics and their vote very seriously.

Says Mr Bill Kitchens, 52, a single father of two children: “Every chance I get to vote, I do vote. It is important because if you are going to complain about something and you are not willing to do something about it to change it... then you don’t have a reason to complain.”