NEW YORK (WASHINGTON POST) - A person referred to as "Commadre Maria" regularly sent Joaquin Archivaldo Guzman Loera pictures of girls as young as 13, and the notorious drug lord and his associates allegedly paid US$5,000 (S$6,700) for each teen and raped them at one of his ranches.

Guzman, known worldwide as "El Chapo", allegedly raped young girls on multiple occasions and called the youngest among them his "vitamins" because he believed they gave him "life".

The disturbing allegations were recounted in documents that were unsealed last Friday (Feb 1), just two days before jurors in Guzman's drug-trafficking trial in New York are set to begin deliberations.

"Joaquin denies the allegations, which lack any corroboration and were deemed too prejudicial and unreliable to be admitted at trial," Mr Balarezo said in a statement.

"It is unfortunate that the material was publicly released just prior to the jury beginning deliberations."

For two months, federal prosecutors portrayed Guzman as a ruthless leader of the Sinaloa cartel. Testimonies, replete with tales of bloody assassinations, corrupt public officials and tunnels used for escapes and drug smuggling operations, have offered an unprecedented glimpse into a secretive and sprawling drug empire that officials said funnelled drugs into the United States for more than two decades.

But stories alleging brazen sex lives and beliefs about the Illuminati and witch doctors were left out of the testimonies. Prosecutors did not believe these were relevant to proving Guzman's drug-trafficking activities, according to court records.

The documents were made public following letters from media organisations, including the New York Times, which had complained of the trial's secrecy. Prosecutors also said there is no longer a need to keep the documents sealed because the identities of cooperating witnesses identified in the records have already been publicly revealed.

The allegations came from a person identified in court records as "Cooperating Witness No. 1" and in media reports as Alex Cifuentes, a former right-hand man who had previously testified that Guzman bragged about paying former Mexican president Enrique Pena Nieto a US$100 million bribe. 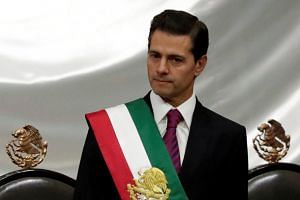 Cifuentes told officials that he lived with Guzman from 2007 to 2008 and that they raped underage girls during that time. He said he helped Guzman drug the girls by placing a powdery substance in their drinks and that he had intercourse with teens as young as 15, according to court records.

The documents also included references to Cifuentes' eccentric beliefs. Cellphone communications intercepted by law enforcement agencies showed that he had interests in the Illuminati, Freemasonry and UFOs, and had communicated with an associate about an impending 2012 apocalypse.

Prosecutors did not introduce those pieces of information at trial because doing so would elicit testimony about the witness' sexual activities and unorthodox beliefs, none of which, they said, were relevant to the crimes Guzman was accused of.

A defence cross examination of one of the government's cooperating witnesses "would be unfairly prejudicial and would unnecessarily harass" Cifuentes, according to court records.

Buried in the documents is another rape allegation that was also not presented at trial. One paragraph says that Guzman raped one of the government's witnesses, began a romantic relationship with her and drew her into the drug enterprise. The only woman among the prosecutors' cooperating witnesses is Lucero Guadalupe Sanchez Lopez, one of Guzman's mistresses, the New York Times reported.

Sanchez had testified earlier that she escaped with Guzman through a tunnel on Feb 17, 2014, when a team of Mexican marines showed up at his front door, the Times reported.

Guzman was captured five days later, on Feb 22, 2014, in the Mexican town of Mazatlan, only to escape in 2015 through a tunnel from his cell's shower to an abandoned home a mile away. He was recaptured in 2016, and Mexican authorities decided to send him to the United States to face trial.

He first fled a Mexican prison in 2001, when he engineered an escape in a laundry cart with the help of prison officials he had bribed, court records say.

Guzman's defence team has portrayed him as a scapegoat whose "mythological" status as a drug kingpin was a creation of the Mexican and US governments. In closing arguments last Thursday, defence attorney Jeffrey Lichtman compared cooperating witnesses to "gutter human beings" and said they are lying to save themselves.

Guzman is charged with engaging in a continuing criminal enterprise, drug trafficking and firearm charges. He faces life in prison if convicted.

Jurors will begin deliberations on Monday.