Democratic front runner Hillary Clinton strengthened her grip on the party's White House nomination after winning at least four states in the latest round of contests, while her Republican rival Donald Trump took at least three states, thumping out home state senator Marco Rubio in Florida but losing to senator John Kasich in the crucial state of Ohio.

Soon after Mr Trump was projected to win Florida on Tuesday night US time (March 15), Mr Rubio announced he was quitting the race for the White House, signalling the strength of the Trump campaign.

“While it is not God’s plan that I be president in 2016 or maybe ever, and while today my campaign is suspended, the fact that I’ve even come this far is evidence of how special America truly is.”

Mrs Clinton won the states of  Florida, Ohio, Illinois and North Carolina, and is also expected to win in Missouri where she is in a close fight with Vermont Senator Bernie Sanders.

Mr Trump took the states of Florida, North Carolina, Illinois and is expected to win the close contest in Missouri.

Mrs Clinton's victories on one of the most delegate-rich nights of the Democratic presidential contest had her supporters confident that she would emerge from the latest round of voting with a virtually insurmountable delegate lead over Mr Sanders. 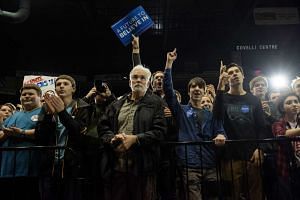 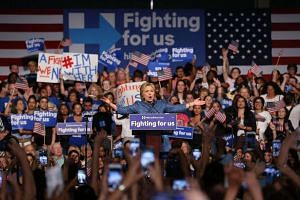 In Pictures: Scenes from Super Tuesday 2

She used her victory speech to address a potential showdown with Mr Trump in the November election. 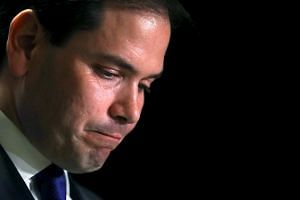 “It’s clearer than ever this may be one of the most consequential elections of our lifetimes,” she said at a rally in West Palm Beach, Florida,

“Our commander-in-chief has to be able to defend our country, not embarrass it; engage our allies, not alienate them; defeat our adversaries, not embolden them,” she said in a clear reference to Mr Trump.

Mrs Clinton's wins on Tuesday re-energised her campaign after a surprise loss to Mr Sanders last week in Michigan.

Mr Trump also celebrated his wins, saying "this was an amazing evening.”

But Mr Trump hit an obstacle in Ohio, where he lost to home state governor John Kasich.

Mr  Kasich  told CNN that he is the best person to beat Mrs Clinton and is lining up great political support.

"We are very happy, we run a positive campaign... one that shows our record of balancing budgets," he said.

Five states went to the polls on Tuesday, in what was labelled the most important day in the primary election calendar to date.

It was the first time during the Republican primary when candidates can sweep up all the delegates in a state, thus pulling ahead of the competition if they achieve a win.

The winner-takes-all states are Florida and Ohio, while the other states - Missouri, Ilinois and North Carolina - will divide delegates proportionally.

Candidates swing through the US states during a primary election, picking up delegates who will ultimately vote for a nominee at the party's convention in July.

While there is no winner-takes-all ruling on the side of the Democrats, Mrs Clinton's campaign is gaining even more momentum as the primaries move on to states such as Utah and Arizona on March 22.

"We are moving closer to securing the democratic party nomination and winning this election in November," said Mrs Clinton, as she spoke to supporters in West Palm Beach.