It runs the gamut from construction, energy, fishing and financial services, to information technology, manufacturing, medical, mining, textiles, transportation, and operation of any port of entry on land and sea.

Its teeth are in Section 4, where the order essentially empowers the US Government to freeze any and all funds it can get its hands on associated with entities that do any kind of trade with North Korea. 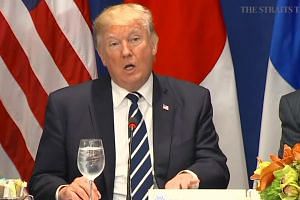 “That is the bunker buster clause, and it is quite a powerful warning,” Dr Sung-Yoon Lee, Professor of Korean Studies at the Fletcher School of Law and Diplomacy at Tufts University in Boston, told The Straits Times.

Yet analysts caution that it will still take months for sanctions to bite, and North Korean strongman Kim Jong Un may well conduct more tests as he rushes to perfect a deterrent nuclear missile system even as his economy – and the people – begin to suffer.

“Even in the best of sanctions there is a time lag,” Ms Shihoko Goto, Senior Associate for North-east Asia at the Woodrow Wilson Centre’s Asia Program told The Straits Times.

“There is technology that has already been developed that is in the works.”

“Sanctions take time,” cautioned Dr Lee. He estimated it may take six months for the effect of the new sanctions to be apparent.

“It allows us to block any financial institution that doesn’t follow through on the UN sanctions,” he added.

“The objective is for (North Korea) to stop their missile tests and give up their nuclear weapons,” he said. “We hope for voluntary cooperation but to the extent we have to cut off banks from the banking system in the United States, we have the tools to do that.”

Earlier, at a bilateral meeting with Mr Trump, Japanese Premier Shinzo Abe said: “Dialogue for the sake of dialogue would not produce anything. The key at this moment is to exercise and apply pressure against North Korea in a robust manner.”

“I’m not sure what other options there are,” said Mr Anthony Ruggiero, a sanctions expert and Senior Fellow at the Foundation for Defence of Democracies.

“Talks have a bad record. The 1994 Agreed Framework was not the glorious deal people like to describe it as, and the Six Party Talks did not lead to denuclearisation, so the suggestion that negotiations will somehow alter the thread is not realistic.”

“This (new executive order) is consistent with the approach we had with Iran,” Mr Ruggiero said.

“That was forcing countries and companies and individuals and banks to choose between the US and Iran, and in this case it is North Korea.”

In May 2015, French bank BNP Paribas SA was ordered by a US judge to forfeit US$8.83 billion and pay a US$140 million fine for violating sanctions on Iran, Sudan and Cuba.

“Until we see a fine on that magnitude, I don’t see any fundamental change in the status quo,” Dr Lee said. "It will take at least two years for any change in North Korea’s strategic calculus. And then they won’t give (nuclear weapons) up but they may make some concessions, like a moratorium on tests.”

Dr Balbina Hwang, visiting professor at Georgetown University, told The Straits Times: “The North Korean regime has decided it wants nukes for strategic reasons, and sanctions alone will never achieve the goal of changing that.”

She, as well as Ms Goto, also said it was not certain what the Pyongyang regime may do if pushed to the wall economically. Sanctions could have unintended consequences. One worry : that North Korea could proliferate, or sell, technology for weapons of mass destruction.

At the end of the day, denuclearisation will not come until Kim Jong Un felts an existential threat, said Dr Lee.

“It will not come until he feels it is either denuclearise or abdication or death. Until that existential point is reached, denuclearisation is a pipe dream,” he said.