WASHINGTON (AFP) - US President-elect Donald Trump's choice to be his powerful national security adviser is a former military intelligence chief who sees militant Islam as the biggest threat to global stability.

The retired three-star general, a veteran of America's recent wars in Iraq and Afghanistan, has courted controversy with extreme statements that critics say border on Islamophobia.

Meanwhile, he has taken a more flexible line on Russia and China, countries the outgoing administration of Barack Obama regards as the country's principal strategic opponents. 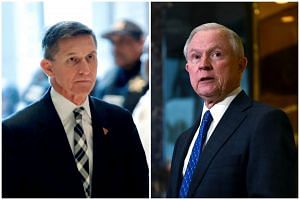 Mike Flynn's paid appearance at a dinner in Russia last year sitting next to Russian President Vladimir Putin has raised eyebrows, as have his accommodating statements towards Moscow that suggest, along with Trump's, a readiness to accept Russia's seizure of Crimea and its support for embattled Syrian leader Bashar al-Assad.

"We beat Hitler because of our relationship with the Russians, so anybody that looks on it as anything but a relationship that's required for mutual supporting interests, including ISIS, ...that's really where I'm at with Russia," he told the Washington Post in August.

"We have a problem with radical Islamism and I actually think that we could work together with them against this enemy. They have a worse problem than we do."

Son of a Rhode Island banker, Flynn had a professional army career mainly in intelligence units. In the 2000s, he served in Iraq and then Afghanistan, where he became director of intelligence for coalition forces.

In 2012, he was named by Obama to lead the 16,500-strong Defence Intelligence Agency, but he was forced out in less than two years amid a turbulent restructuring effort and clashes with his superiors.

Since then he has repeatedly criticised the Obama government as inadequately focused on the Islamist threat, publishing a book this year entitled: The Field Of Fight: How We Can Win The Global War Against Radical Islam And Its Allies.

In it, he argues that Muslim countries must be forced to recognise and stamp out radical Islamic beliefs, which he says are "metastasising" around the world.

"We're in a global war, facing an enemy alliance that runs from Pyongyang, North Korea, to Havana, Cuba, and Caracas, Venezuela," he wrote in the New York Post in July.

"Along the way, the alliance picks up radical Muslim countries and organisations such as Iran, Al-Qaeda, the Taleban and Islamic State."

Like Trump, Flynn has also criticised US allies in Nato for not putting enough of their own effort and funding into the crucial western defence treaty.

Critics in the national security community see his views as one-dimensional and warn they could upset well-established relationships that benefit the United States.

They also question his willingness to take money from Russian government-backed groups, and his support for Turkish President Recep Tayyip Erdogan's harsh crackdown on dissent.

In a statement on Friday (Nov 18), Adam Schiff, the top Democrat on the House Intelligence Committee, said he was "deeply concerned" over Flynn's view on Russia.

"The incoming president would be better served by someone with a healthy scepticism about Russian intentions, and willing to be guided by the unequivocal intelligence we have of Russian's malignant policies towards the US and our allies," he said.