Trump said aboard Air Force One that a US delegation would likely make the trip in November, adding that he will “possibly” go to the Apec summit in Vietnam at the same time.

The announcement sets the stage for a wildly ambitious first visit to a region that is vital to US economic and security interests.

The visit is likely to focus heavily on trade and North Korea’s nuclear and ballistic weapons programmes, one of Trump’s biggest security challenges since coming to office.

Trump has repeatedly said that he will not tolerate Pyongyang developing the capability of hitting the United States with a thermonuclear weapon, threatening to rain down “fire and fury” if necessary.

But with North Korea on the cusp of marrying nuclear warhead and intercontinental ballistic missile technology, Trump has struggled to get China to buy in to biting sanctions.

The visit will be another opportunity for Trump to press his Chinese counterpart Xi Jinping, and crucially will come after an October Congress of the Communist Party. 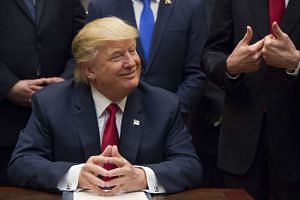 Privately, US officials admit Xi is unlikely to back tougher sanctions before that meeting, which sets the course for China’s leadership in the next five years.

Vice-President Mike Pence had earlier announced that Trump would also visit the Philippines in November for an Asean summit, but the president was more cool to the idea.

Trump said only that “he invited us so we’re going to see,” apparently referring to controversial President Rodrigo Duterte.

Police have reported killing more than 3,800 people to fulfil Duterte’s vow to rid the country of narcotics, with the 15-month crackdown triggering wider violence that has seen thousands of other people found dead in unexplained circumstances.