Apple said on Wednesday it would return hundreds of billions of dollars to the US from overseas, pay a US$38 billion (S$50 billion) tax bill on that money and invest about US$350 billion in its domestic operations over the next five years.

The company plans capital expenditures of about US$30 billion and will create about 20,000 new jobs at existing sites and a new campus.

"I just called Tim Cook and thanked him, but I don't imagine there has ever been an investment that big in our country by a company."

Apple shares were mostly unchanged on Thursday after closing Wednesday at a record high, US$179.10.

Cook and Trump have not been close. 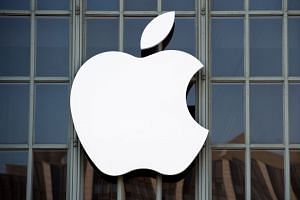 Apple pledges US$350b investment in US economy, to create 20,000 jobs in next five years

While the Apple chief has spread his political donations across both major US parties, according to Federal Election Commission, he held a fund-raiser in 2016 for Hilary Clinton and last year pledged US$2 million to anti-hate groups after a deadly rally by white supremacists in Charlottesville, Virginia.

In an e-mail to Apple staff, Cook criticised President Trump for blaming "both sides" for violence at the rally.