WASHINGTON (REUTERS) - FBI agents who raided the offices of US President Donald Trump’s personal attorney were looking for details about “arrangements, agreements and payments” related to two women who have said they had sexual relationships with Trump, a source said on Tuesday (April 10).

In its search targeting attorney Michael Cohen on Monday, the FBI was looking for information on payments to adult-film star Stormy Daniels, who received a US$130,000 (S$170,000) payment from Cohen in exchange for signing a non-disclosure agreement, and Karen McDougal, a former Playboy model, the source said.

The Federal Bureau of Investigation searches of Cohen’s office and home, which Trump denounced on Monday as disgraceful, were a dramatic new development in a series of probes involving associates of the Republican president.

The raids were related to a federal investigation led by Special Counsel Robert Mueller into alleged Russian meddling in the 2016 US presidential election and possible collusion by Trump campaign aides.

The New York Times, which first reported on the news about the women, said the search warrant sought information about McDougal, who was paid US$150,000 by the parent company to tabloid newspaper The National Enquirer, which then withheld a story about her relationship with Trump.

Trump, a New York businessman before he became president, is close to the company’s chief executive.

A source familiar with the matter confirmed the FBI was looking into the payments, including the Enquirer connection, but said they were “not the main focus of that part of the investigation.”

Daniels, whose legal name is Stephanie Clifford, has sued Cohen to be released from a nondisclosure agreement over an alleged 2006 one-night stand with Trump. McDougal has said she had a longer affair with him. Trump officials have denied he had relations with either woman.

The source said investigators were looking into whether there was a broader pattern of tax fraud, wire fraud, tax evasion, money laundering and other crimes in Cohen’s private dealings, including his work for Trump and some real estate transactions that involved Russian buyers and prices that appeared to be well above market values.

Angry over the raids targeting Cohen, Trump reprised his attacks on law enforcement in two brief Twitter messages on Tuesday. He lamented that “attorney-client privilege is dead,”and denounced a “total witch hunt,” apparently restating his long-held view of Mueller’s investigation. He did not elaborate.

The New York Times reported that the searches enraged Trump and that he was said to be considering firing Deputy Attorney General Rod Rosenstein. Rosenstein signed off on the raid, according to officials familiar with the investigation.

“The raid is seismic,” Democratic U.S. Senator Richard Blumenthal, a former U.S. attorney, told MSNBC on Tuesday, adding that such FBI searches indicate the possibility that a crime was committed.

‘SUICIDE’ TO TRY TO REMOVE MUELLER

The Russia investigation has dogged Trump since he took office last year, prompting him to publicly criticise Attorney-General Jeff Sessions for recusing himself from the probe, and to suggest periodically that he might try to have Mueller dismissed. 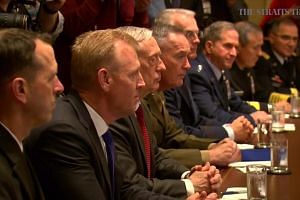 Monday’s events renewed concerns that Trump could try to act against Mueller, who was appointed last year by Rosenstein. Critics have said that if Trump tried to remove Mueller it would amount to interference in the investigation.

Republican and Democratic lawmakers urged Trump not to fire Mueller.

“It would be suicide for the president to want to talk about firing Mueller. The less the president said on this whole thing, the better off he would be, the stronger his presidency would be,” Republican US Senator Chuck Grassley said in an interview on the Fox Business Network.

Grassley is chairman of the Senate Judiciary Committee, which is among congressional panels conducting their own Russia probes.

“It would be the worst thing he could possibly do,” said Democratic Senator Dianne Feinstein. US Senate Democratic Leader Chuck Schumer renewed a call by his party for bipartisan legislation to protect the US special counsel.

Moscow has denied US intelligence agencies’ findings that it meddled in the 2016 presidential campaign and sought to tilt the race in Trump’s favour. Trump has denied any collusion by his campaign.

Cohen’s lawyer, Stephen M. Ryan, said on Monday prosecutors seized communications between Cohen and his clients based in part on a referral by Mueller.

The attorney-client privilege that Trump referred to is intended to encourage open communications between lawyers and their clients, so that lawyers can provide sound legal advice. But the privilege is not absolute, and there is an exception for communications made to further a crime.

Frank Montoya, a former senior FBI official, said it was extremely rare for the bureau to get the authority to search a lawyer’s office, let alone a residence.

“No question, a search warrant for a lawyer is an extraordinary act,” he told Reuters. “Factor in that, in this instance, it was the president’s own attorney. Unprecedented.”

Montoya said the warrant regarding Cohen would have required rigorous scrutiny above and beyond the normal warrant process.

“Everyone involved in this process, including the judge who signed the warrant, understood the scrutiny that would follow its execution,” he said.

“As such, everyone in the process would have done their damnedest to make the warrant as bulletproof as possible.”