WASHINGTON (AFP) - President Donald Trump on Friday (Sept 29) weighed in on the emerging fight over how to finance already debt-stricken Puerto Rico's recovery from Hurricane Maria.

Trump said that Puerto Rico's government - already more than US$70 billion (S$95 billion) in debt before the storm hit - "unfortunately aren't able to handle this catastrophe on their own."

The category four storm has destroyed the island's rickety electricity grid and knocked out basic communications.

Physical damage alone is estimated to be in the region of US$25 billion, according to ENKI, a disaster modelling firm.

Amid mounting questions about who will pay for rebuilding infrastructure in the long term, Trump suggested the local authorities, which were already struggling to meet existing debt payments, would have to pitch in.

"Ultimately, the government of Puerto Rico will have to work with us to determine how this massive rebuilding effort - it will end up being one of the biggest ever - will be funded and organised, and what we will do with the tremendous amount of existing debt already on the island," Trump said.

The focus will anger some, who insist that the US government should first take care of Puerto Ricans who don't have access to potable water or reliable shelter. 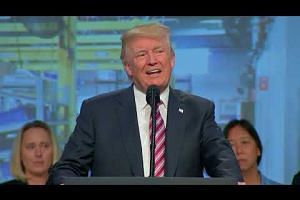 Trump again defended his administration's response to the crisis, saying "people have never seen anything like this."

He also said that Puerto Rico "is an island surrounded by water, big water, ocean water".

Experts, like the Brad Setser of the Council on Foreign Relations have warned that "Puerto Rico's humanitarian crisis is likely to quickly turn into a budget crisis."

Tax collection is likely to be put on hiatus, he wrote, adding that "there is no way Puerto Rico can pay its debts right now".

Market insiders are already discussing the possibility of bond holders having to revise agreements.