WASHINGTON (AFP) - House Republicans delivered a first-step victory on Thursday (Nov 16) to President Donald Trump by passing a landmark tax overhaul, but the debate now shifts to the Senate, where a narrower path to success awaits.

Trump had rallied his party footsoldiers barely an hour earlier in the US Capitol, leaning on them to advance the sweeping tax cuts for corporations and individuals as he seeks to lock down a first major legislative win by year’s end.

The House of Representatives voted 227 to 205 to pass the legislation, after Trump addressed Republican members in person and urged them to get the measure over the finish line.

Trump, in a tweet, congratulated the House for taking “a big step toward fulfilling our promise to deliver historic TAX CUTS for the American people by the end of the year.”

The Bill’s success also marked a key victory for House Speaker Paul Ryan, who has struggled to get Trump’s agenda through Congress.

“This is one of the most historic and biggest things that we will ever do,” House Speaker Paul Ryan told the chamber as debate concluded on the measure.

Ryan pushed the narrative that the measure helps middle class families, reiterating his claim that the Bill will save US$1,182 for a typical US family of four earning US$59,000 (S$80,000).

The overhaul is “about tax relief, it’s about fairness, it’s about simplicity, it’s about easing the stress and anxiety in this country,” Ryan added.

It was also clearly about checking a key box that had been a prominent campaign pledge, after Trump and his Republicans failed on several attempts to repeal president Barack Obama’s health-care law. 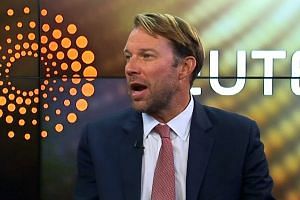 “Hey, you got a chance to be mediocre or to be great. Today’s your chance to get it right,” Trump told the Republicans, according to Bacon.

The Bill passed despite concerns by some Republicans in high-tax states like New Jersey that their constituents could end up paying more to Uncle Sam.

Thirteen Republicans joined all voting Democrats in opposing the legislation.

With the first major hurdle cleared, said conservative congressman Dave Brat, Trump’s role will be as messenger in chief.

“We just want him to sell it to America,” Brat said.

The overhaul is a dicier proposition in the Senate, where Republicans hold a two-seat majority, 52-48.

Ron Johnson became the first Senate Republican to publicly oppose the measure, warning that it hands major tax breaks to corporations while smaller, “pass-through” businesses in which owners are taxed individually are treated differently.

“I’m not going to vote for this tax package,” Johnson told the Wall Street Journal on Wednesday, adding that the plan unfairly benefits corporations more than other types of businesses.

With senators expected to vote along party lines, Republicans can afford only two defectors. If three vote no, the Bill fails.

Adding a new twist to the ambitious legislation, Senate Republicans have bowed to Trump pressure and included a repeal of the Obamacare individual mandate in their tax overhaul.

Republicans are keen to take another stab at crippling the 2010 health-care law.

Repealing the rule that requires individuals to have health insurance or pay a fine would save US$338 billion, the non-partisan Congressional Budget Office projected, money that could help pay for tax reform.

But CBO also projected it would raise health insurance costs by 10 per cent, and lead to 13 million fewer people with coverage over the next decade.

“If (Republicans) do this, every problem in health care will be on their backs,” he said.

A handful of Senate Republicans could make or break the legislation.

They include John McCain, Susan Collins and Lisa Murkowski, who together sank Trump’s Obamacare repeal effort this summer.

“Whatever is wrong with this bill, we’ve got to make it better,” he told Fox News. “If we fail, we are dead... That’s the end of the Republican majority.”

Congress is off next week for the Thanksgiving holiday, and when they return there will be little room for delay.

Then come negotiations to synchronize the House and Senate versions.

“We’ll come to a common point and we’ll get this to his desk at Christmas,” House Republican Tom Cole said.

But the fusion could be tricky.

While the House version permanently cuts the corporate tax rate from 35 per cent to 20 per cent, effective in 2018, the Senate’s would delay that cut by a year.

The House version also maintains the nation’s top tax bracket for the wealthiest individuals at 39.6 per cent, while the Senate lowers the top tier to 38.5 per cent.