WASHINGTON (REUTERS) – US President Donald Trump on Thursday (Feb 22) pushed his call to arm teachers following last week’s school massacre in Florida, saying it would be limited to those with military or special training but “would solve the problem instantly".

His idea has already drawn a strongly divided reaction in a country where there are fierce divisions on how to curb mass shootings and everyday gun violence.

Mr Trump, a Republican who has backed gun rights, raised the idea of arming teachers during an emotional, hour-long discussion on Wednesday with students who survived the attack on a Florida high school and a parent whose child did not.

“Highly trained, gun adept, teachers/coaches would solve the problem instantly, before police arrive. GREAT DETERRENT!” he wrote in a series of posts on Twitter early on Thursday.

He had suggested on Wednesday that arming teachers could help prevent massacres such as last week’s mass shooting at a Florida high school.

Trump voiced support for the idea during an emotional White House meeting with students who survived the shooting and a parent whose child did not.

“If you had a teacher ... who was adept at firearms, it could very well end the attack very quickly,” said Trump, who acknowledged the idea would be controversial.

He sat in the middle of a semi-circle in the State Dining Room of the White House, listening intently as students wept and pleaded for change.

He vowed to take steps to improve background checks for gun buyers.

The meeting included six students from Marjory Stoneman Douglas High School in Parkland, Florida, where 17 students and educators were slain on Feb 14 by a gunman with an AR-15 semi-automatic assault rifle in the second-deadliest shooting at a US public school.

“I don’t understand why I can still go in a store and buy a weapon of war, an AR,” said Sam Zeif, 18, sobbing after he described texting his family members during the Florida shooting. “Let’s never let this happen again please, please,” Zeif said. 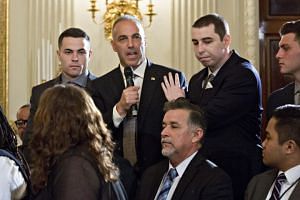 March for our Lives: Meet survivors of Florida shooting now taking on US powerful gun lobby

Andrew Pollack, whose daughter Meadow Pollack, 18, was killed, shouted: “It should have been one school shooting and we should have fixed it. And I’m pissed – because my daughter - I’m not going to see again.”

Trump said his administration would emphasize background checks and mental health in an effort to make schools safer.

Trump’s support for any tightening of gun laws would mark a change for the Republican, who was endorsed by the National Rifle Association (NRA) gun rights group during the 2016 presidential campaign.