WASHINGTON (NYTIMES) - United States President Donald Trump monitored the impact of Hurricane Irma from the presidential retreat at Camp David on Saturday (Sept 9), as he held the fourth full Cabinet meeting of his presidency to discuss how to advance his administration's priorities during the balance of his first year in office.

Aides said Trump would receive hurricane briefings throughout the day as the powerful storm marched toward the southern tip of Florida, forcing millions of residents to flee the impending surge of water and brutally strong winds.

"With gratitude for our first responders, and prayers for those in the storm's path, America stands united - and I mean totally united," Trump said in his weekly address, which was released Friday evening.

White House officials did not allow journalists to photograph the Cabinet meeting or to ask the president questions. Instead, the White House released official photographs showing Trump and his Cabinet members sitting around a conference room table Saturday afternoon in what it said was a briefing on the "track and potential impact" of the hurricane.

One picture indicated that Trump and his advisers were praying. Other pictures showed the president, dressed in a navy suit, white shirt and striped tie, having a discussion. 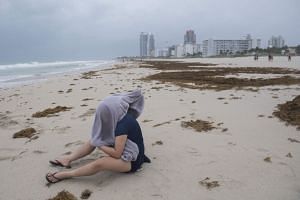 Later in the evening, the White House released a nearly five-minute YouTube video of Trump speaking to his Cabinet members at the beginning of the meeting.

Reading from prepared remarks, Trump said that "all of America grieves" for those who have already lost their lives from Hurricane Irma, and he urged people in Florida to heed the directions offered by state and local authorities.

"This is a storm of enormous destructive power. I ask everyone in the storm path to heed all instructions. Get out of its way," he said, adding: "Property is replaceable, but lives are not, and safety has to come first. Don't worry about it. Just get out of its way."

Trump said he planned to discuss other topics with his Cabinet as well, including what he called "the latest provocative and destabilising actions of North Korea" and the need for an overhaul of the nation's tax code.

He said the tax effort would seek to lower rates and bring back capital parked by businesses overseas because of high business tax rates in the United States. He said that would amount to "in the neighborhood of 4 to 5 trillion" dollars.

Trump is scheduled to return to the White House on Sunday afternoon. Officials said Trump would receive a teleconference briefing on the hurricane at 10am before he returned to Washington.

On Friday, administration officials expressed confidence that the Federal Emergency Management Agency had the resources to respond to Hurricane Irma even as it continues to deal with the aftermath of the flooding in Texas and Louisiana from Hurricane Harvey.

"I'm pretty comfortable in our ability and our capacity as leaders, but also as institutions to handle the various different things that come our way," said Thomas P. Bossert, the president's Homeland Security adviser.

In his address, Trump pledged that "we will endure and come back stronger than ever before." But in a tweet later Friday night, Trump raised concerns with a long-standing policy that prevents Fema from providing grants to houses of worship that are damaged by hurricanes and other natural disasters.

"Churches in Texas should be entitled to reimbursement from Fema Relief Funds for helping victims of Hurricane Harvey (just like others)," Trump wrote on Twitter.

Three Texas churches that were damaged by Hurricane Harvey filed a lawsuit last week arguing that the policy violates their constitutional right to freely exercise their religion. Fema's position for years has been that the constitutional separation of church and state prevents the use of federal money to build religious institutions.

White House officials said the president had invited all of the members of his Cabinet, and their spouses, to Camp David for the weekend.

Among the agenda items for the Cabinet meeting, officials said, was a discussion of Trump's push for new investments in infrastructure, and his call for Congress to extend protections for the young undocumented immigrants known as "Dreamers".

"The goal is that Congress makes a permanent fix and that Congress actually does their job, and that we have responsible immigration reform that takes place over these six months," Sarah Huckabee Sanders, the White House press secretary, said Friday.