MEXICO CITY (REUTERS) – Donald Trump told Mexican President Enrique Pena Nieto on Wednesday (Aug 31) that the United States has the right to build a border wall to halt illegal immigration, but the Republican presidential candidate did not bring up his signature demand that Mexico pay for it.

In an unexpected trip to a country that he has vilified for causing illegal immigration and drug smuggling into the United States, Trump held talks with the Mexican leader at his Los Pinos residence for about an hour.

“We did discuss the wall, we didn’t discuss payment of the wall, that will be at a later date, this was a very preliminary meeting. It was an excellent meeting,” Trump said.

Trump is trailing Democratic rival Hillary Clinton in opinion polls for the Nov 8 election. The New York businessman’s aides hoped the trip would make him look presidential and show he is willing to deal head on with a thorny issue like relations with Mexico.

But his omission of asking Mexico to pay for the wall during Wednesday’s talks was notable.

Trump’s call for Mexico to fund the wall is often the central moment of his campaign rallies. He asks the crowd who will pay for the wall, and supporters shout back, “Mexico!” 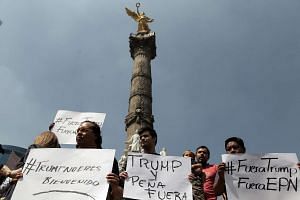 The Republican candidate first made his accusations that Mexico is sending criminals and rapists across the border and pledged to build a wall that Mexico would pay for when he launched his presidential bid in June last year. He has also accused Mexico of cheating the United States on trade.

The Mexican President said the many millions of Mexicans in the United States deserve respect, but offered only a mild rebuke of Trump for his rhetoric. “The Mexican people has felt aggrieved by comments that have been made, but I was sure his interest in building a relationship is genuine,” Pena Nieto said at a joint media event after the talks.

A few dozen demonstrators gathered beneath a monument to Mexican independence in the center of the capital to protest the visit, some holding placards emblazoned with captions such as“You are not Wall-come” and “Trump and Pena out.”

Pena Nieto has been enmeshed in his own controversies, including over whether he plagiarised some of his 1991 undergraduate law thesis.

Trump’s visit to Mexico City took place hours before he was due to deliver a highly anticipated speech in the US border state of Arizona on how he would tackle illegal immigration if he wins the election.

Trump has been pilloried in Mexico since he launched his White House campaign last year.

He has pledged to renegotiate or scrap the 1994 North American Free Trade Agreement trade deal between the United States, Mexico and Canada.

Clinton, a former secretary of state, said Trump could not paper over his previous harsh language against Mexico, which helped him defeat 16 rivals for the Republican presidential nomination.

“It certainly takes more than trying to make up for more than a year of insults and insinuations by dropping in on our neighbours for a few hours and then flying home again,” she told a convention of the American Legion military veterans’ group in Cincinnati.