Presidential hopeful betting that social conservatives would side with him

COLUMBIA (South Carolina) • In his most audacious attack yet on a revered public figure, Mr Donald Trump veered into risky political territory on Thursday when he denounced Pope Francis, seeking to galvanise Republicans who worry about border security and appeal to evangelical voters who regard the religious leader as too liberal.

After the pontiff's remarkable contention that Mr Trump "is not Christian" in proposing deportations and a wall with Mexico, the candidate said Pope Francis' criticism was "disgraceful" and he contended that the Mexican government had hoodwinked the Pope into criticising him.

The pontiff made the remarks in response to journalists' questions about Mr Trump's anti-immigration stance, during his return journey from a trip to Mexico.

"A person who thinks only about building walls, wherever they may be, and not building bridges, is not Christian," the Pope said.

"Vote, don't vote, I won't meddle. But I simply say, if he says these things, this man is not a Christian."

A person who thinks only about building walls, wherever they may be, and not building bridges, is not Christian.

Mr Trump, in a statement delivered on a campaign stop in South Carolina, which holds its Republican primary this weekend, shot back: "For a religious leader to question a person's faith is disgraceful. I am proud to be a Christian and, as president, I will not allow Christianity to be consistently attacked and weakened.

For a religious leader to question a person's faith is disgraceful. I am proud to be a Christian and, as president, I will not allow Christianity to be consistently attacked and weakened.

"If and when the Vatican is attacked by ISIS (Islamic State in Iraq and Syria), which as everyone knows is ISIS' ultimate trophy, I can promise you that the Pope would have only wished and prayed that Donald Trump were president, because this would not have happened."

But Mr Trump has been increasingly aggressive ahead of today's primary in South Carolina, where polls show a tightening race and the popular Republican governor, Ms Nikki Haley, has just endorsed Senator Marco Rubio of Florida. 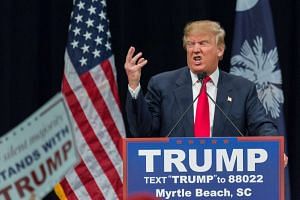 Vatican to Trump: It's not 'personal', it's religion

Mr Trump's attack on Pope Francis reflected a political calculation that criticising the Pope would not hurt him with conservatives and might even improve his standing in South Carolina and in the Southern-dominated Super Tuesday contests on March 1.

Some evangelical denominations in the South and elsewhere take a dim view of the Roman Catholic Church, and many other social conservatives have been critical of Pope Francis over his relatively measured statements about gays, birth control and divorce.

Attacking the Pope could energise conservatives who think that Mr Trump will go to greater lengths to halt illegal immigration than establishment politicians and power brokers like the Holy See, according to political strategists in both parties.

Republican rivals seized on Mr Trump's comments about the Pope to raise questions about his temperament, yet stopped short of questioning his faith or endorsing the pontiff's criticisms.

At a later town hall meeting televised on CNN, Mr Trump said he had "a lot of respect" for Pope Francis, but that the pontiff had been influenced by hearing only Mexico's side of the border issue.

The Pope's statement also had been exaggerated by the media, he said.

"I think he said something much softer than it was originally reported by the media. I think that he heard one side of the story, which is probably by the Mexican government," he added.

A version of this article appeared in the print edition of The Straits Times on February 20, 2016, with the headline 'Trump hits out at Pope in risky gambit'. Subscribe
Topics:
More
Whatsapp Linkedin FB Messenger Telegram Reddit WeChat Pinterest Print Purchase Article Copy permalink