WASHINGTON (REUTERS) - Settling in as the Republican Party's likely presidential nominee, Donald Trump began fleshing out more economic policy ideas on Thursday, saying he would scrap a slew of federal regulations and refinance longer term US debt if he won the White House in November.

The New York real estate developer has put forward a plan to simplify the US tax code and slash corporate rates, which he says would spur the economy and create jobs, but he has otherwise been light on the detail of his economic proposals.

On Thursday, Trump delved more into how he would seek to boost businesses and fund infrastructure improvements.

"The business people, they talk about regulation more than they talk about taxes," Trump said in an interview with CNBC. "We're lowering taxes very substantially and we're going to be getting rid of a tremendous amount of regulations."

Trump's remaining rivals in the Republican race, US Senator Ted Cruz and Ohio Governor John Kasich, dropped out this week, clearing Trump's path to be picked as the presidential nominee at the party's convention in July.

He must now focus on a likely match-up in the Nov 8 general election with Democratic front-runner Hillary Clinton and make his case for how he would encourage growth and reduce debt, a priority for many Republican voters. 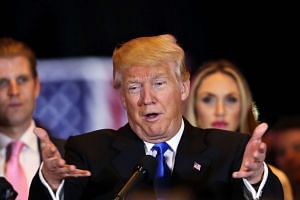 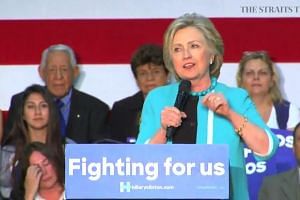 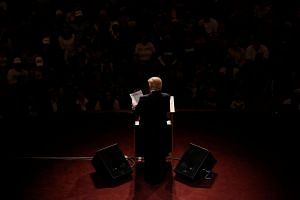 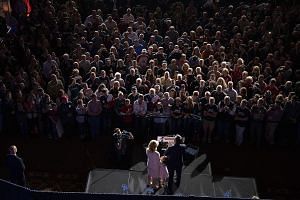 Will Republicans get on the Trump train?

Critics, including many in his own party, have said his campaign has focused on broad promises around the slogan "Make America Great Again," but has delivered very few concrete proposals.

Last month, Trump gave a speech in Washington laying out his foreign policy views, and he is expected to hold similar events focusing on other topics.

On Wednesday, he gave a hint at his economic ideas when he said he was "open to doing something" with the country's minimum wage.

Trump said on Thursday he believes the United States should try to refinance some of its debt to help pay for infrastructure repairs.

He said he did not want to renegotiate bonds, but he thought it was possible to buy back at a discount, depending on interest rates.

"I could see long-term renegotiations where we borrow long term at very low rates. And frankly we do need money to rebuild the infrastructure," Trump said.

The US Treasury Department occasionally uses buybacks for debt management and tested the tool in April.

Renegotiating US debt and asking investors to take a discount, however, could be viewed as a sign of distress that could be risky for global financial markets.

Trump also said he had concerns about the effects on the economy if interest rates rise, given a strong dollar that has weighed on US companies.

Rising US interest rates usually boost the dollar. This can have drawbacks for American companies because a strong dollar makes their exports relatively more expensive for buyers from other countries.