WASHINGTON (REUTERS) - Republican presidential front runner Donald Trump lashed out at what he called the party's "rigged" delegate selection rules on Monday (April 11) after rival Ted Cruz swept all of Colorado's 34 delegates over the weekend.

The New York billionaire, who has been outmanoeuvered by Mr Cruz in a series of recent state meetings to select national convention delegates, said the process was set up to protect party insiders and shut out insurgent candidates.

"The system is rigged, it's crooked," Mr Trump said on Fox News on Monday, alleging the Colorado convention results showed voters were being denied a voice in the process.

"There was no voting. I didn't go out there to make a speech or anything, there's no voting," Mr Trump said.

"The people out there are going crazy, in the Denver area and Colorado itself, and they're going absolutely crazy because they weren't given a vote. This was given by politicians - it's a crooked deal."

Mr Trump has 743 bound delegates to 545 for Mr Cruz, according to an Associated Press count, in the battle for the 1,237 delegates needed to win the nomination on the first ballot and avoid a messy floor fight at the Republican National Convention from July 18-21.

But both are at risk of not acquiring enough delegates for a first-ballot victory, leaving many free to switch their votes on later ballots.

That has set off a fierce scramble by Republican candidates to get their supporters chosen as convention delegates and brought new scrutiny to the selection rules, which vary by state.

Mr Trump, who has brought in veteran strategist Paul Manafort to lead his delegate-gathering efforts, complained about Mr Cruz's recent success at local and state party meetings where activists pick the actual delegates who will attend the national convention.

Mr Trump accused Mr Cruz, a US senator from Texas, of trying to steal delegates in South Carolina. Mr Trump won the state primary in February, but Cruz supporters got four of the first six delegate slots filled at congressional district meetings on Saturday, according to local media.

Mr Cruz also succeeded at getting more of his supporters chosen as delegates in Iowa, where he won the caucuses in January, and at last week's state convention in North Dakota.

"Now they're trying to pick off those delegates one by one," Mr Trump said. "That's not the way democracy is supposed to work. They offer them trips, they offer them all sorts of things and you're allowed to do that. You can buy all these votes."

Mr Trump distributed a video of what he said was a Colorado voter setting his Republican Party registration on fire in protest of the process.

"Great people being disenfranchised by politicians," Mr Trump said on Twitter, adding the Republican Party was "in trouble".

Mr Guy Short, a Cruz backer in Colorado who was elected as a Republican national convention delegate for the sixth time, disputed Mr Trump's allegations.

"Donald Trump is a liar," Mr Short told Reuters in an e-mail."Nobody was offered anything. In fact, I spent thousands of dollars of my own money campaigning to become a delegate because it's that important to make sure Donald Trump is NOT our nominee."

Republican National Committee spokesman Sean Spicer told Fox News the process for choosing delegates had been set by states for more than a year and was no secret.

"Not understanding that is one thing, but it's hardly rigged when it's done right out in the open," he said.

Cruz campaign spokesman Alice Stewart said Mr Trump was insulting the process to distract from his losses. "He has a pattern of whining when he isn't winning", she said in a statement. 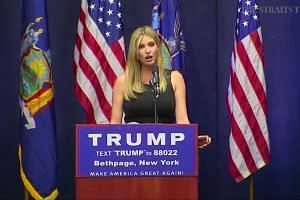 Mr Trump's organisational troubles even extend to two of his children. Mr Eric Trump, 32, and Ms Ivanka Trump, 34, missed the deadline for registering as Republicans to vote in next week's New York primary. State records show both are registered voters who are not enrolled in a party, ABC News reported.

For already registered voters, any request to switch party affiliation must have been made by early October. The deadline for new voter registrations was March 25.

Mr Trump was the target on Monday of a new ad by the Democratic front runner, Mrs Hillary Clinton, that listed his comments on women, Mexican immigrants and Muslims.

Both Mrs Clinton and rival Bernie Sanders, a US senator from Vermont, have tried to position themselves as the Democrat most capable of defeating Mr Trump.

"Donald Trump says we can solve America's problems by turning against each other," Mrs Clinton's ad said. "It's wrong and it goes against everything New York and America stand for."