WESTCHESTER, US (AFP) - Presumptive Republican nominee Donald Trump lambasted his White House opponent Hillary Clinton on Tuesday (June 7), as she was expected to proclaim victory in the Democratic primary race, signalling a fierce battle ahead.

Instead of celebrating the final day of the Republican primaries by laying out a lofty vision for change, Mr Trump unleashed stinging criticism of Mrs Clinton as a political manipulator who lined her own pockets, and a failed secretary of state whose decisions destabilised the world.

"The Clintons have turned the politics of personal enrichment into an art form for themselves," Mr Trump told supporters at his golf property in Westchester, New York. 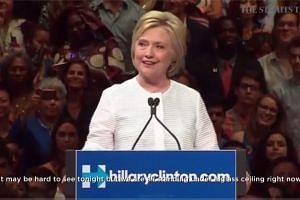 He signalled he plans to go on the offensive against both Hillary and Bill Clinton.

"I am going to give a major speech on probably Monday of next week and we're going to be discussing all of the things that have taken place with the Clintons," he said.

"I think you're going to find it very informative and very, very interesting."

The remarks come as Mrs Clinton was basking in the limelight for having secured enough delegates to clinch the Democratic nomination, making her the first woman in the country's 240-year history to be the standard bearer of a major US political party.

Mrs Clinton's task now will be to unify her party and make nice with her rival Bernie Sanders, who has vowed to take his fight to the Democratic National Convention in late July.

But Mr Trump taunted Mrs Clinton by reaching out directly to Sanders supporters before she took the stage on Tuesday night.

"To all of those Bernie Sanders voters who have been left out in the cold by a rigged system of superdelegates, we welcome you with open arms," Mr Trump said, referring to the party bigwigs and elected Democratic officials who can vote for any candidate at the convention.

Mr Trump did touch briefly on policy and America's challenges, including reducing the US$19-trillion (S$25.7-trillion) national debt, but it was in the guise of attacking Mrs Clinton.

"We're broke," he said. "Our schools are failing. Crime is rising. People are scared. The last thing we need is Hillary Clinton in the White House - an extension of the Obama disaster."

"But we can turn this all around," Mr Trump added. "We're going to do it by putting America first."

The billionaire real estate tycoon has been under extreme pressure from fellow Republicans for a series of attacks he has made against a Mexican-American federal judge, but Mr Trump defended his actions, casting himself as a scrappy fighter.