Every four years, Americans vote for a president. Traditionally, they rally round their new leader after the votes are counted. This year, though, not much has been traditional about the campaigns, or the result. Now, the last man standing is staring into a gaping chasm that has opened between Americans, unhappy with the government and the parties that have run the country for years. The gulf is one that will take all of President-elect Donald Trump's building experience to bridge.

Long before United States President-elect Donald Trump takes the oath of office, the wall he pledged to build already seems to be rising - fast. The problem is that the barrier between people is going up not along the Mexican border, but smack dab inside the US itself.

A mobile phone video showed white middle school students in Royal Oak, Michigan, who are not old enough to vote, celebrating the Republican's victory by chanting "Build the wall! Build the wall!" in front of Hispanic classmates.

On Twitter, a woman whose photo shows her with her head covered, posted: "I was just told by my white #trump loving bosses to remove my #hijab because they don't want a #muslim representing their business."

Some who feel threatened by Mr Trump's win are even wearing safety pins. New York magazine said Twitter user #cheah came up with the idea so "anyone against the sort of nationalistic, racist violence we've been seeing could identify themselves as a safe ally".

On the other side, anti-Trump protesters are spilling into the streets from Boston to San Francisco to Miami. More than 225 were arrested in various cities after enraged demonstrators blocked highways and chanted "Not my president". In Chicago, a clip reportedly showed Mr David Wilcox, 49, being beaten and kicked in the face by a mob shouting: "You voted Trump. Don't vote Trump."

The reason Mr Wilcox became a target of such anger? He personified the Trump voter. Demographic surveys showed that Tuesday's election turned on what CNN political commentator Van Jones had called "whitelash", a wordplay on the term backlash. Indeed, New York Times exit polls found that Mr Trump's supporters were 58 per cent white, while Mrs Hillary Clinton got 88 per cent of the black vote and 65 per cent each of the Hispanic and Asian-American vote. In addition, 53 per cent of Mr Trump's support came from males, 53 per cent from voters aged between 45 and 64, and another 53 per cent from people 65 or older.

We knew that the country was really divided, at least in a lot of ways, before. The election didn't really tell us anything we didn't know about that... What's new is the legitimisation of a kind of overt hostility, Trump-style, and the sense that it is okay to say and do things that weren't okay to say and do before

In the end, the presidential vote revealed a veritable "divided States of America".

Mrs Kari Sherman, who lives in Los Angeles with her husband and three children, told CNN she realised just how split her country was three days after her shock at seeing Mr Trump elected. "I think a lot of what I'm feeling, and other people I know are feeling, is a sense of betrayal that this country isn't what we thought it was," she said.

Political science professor Joseph White of Case Western Reserve University said: "We knew that the country was really divided, at least in a lot of ways, before. The election didn't really tell us anything we didn't know about that - just that the votes, for various reasons, ended up splitting slightly differently than they did in the last election."

He said the polarisation in politics that spread into society has been growing for years.

"What's new is the legitimisation of a kind of overt hostility, Trump- style, and the sense that it is okay to say and do things that weren't okay to say and do before," said Prof White. "And obviously, the potential objects of that are Mexicans, blacks, Jews and maybe Asians."

The latest results show Mr Trump winning the electoral college, which is measured on the state-by-state results, 290 to 228. But Mrs Clinton is ahead by a hair's breadth in the popular vote at 47.72 per cent to 47.41 per cent.

That, at least, offers a glimmer of hope for Ms Alexandria Nancy Duzy-Venick, 45, a doctor of natural medicine in Pennsylvania, who had put in long hours getting out the vote from a Clinton field office. She said she became "sick to my stomach" as the results trickled in against the first woman candidate whom she expected to be an agent of change by breaking the male stranglehold on the office.

In another early sign that Mr Trump's election could polarise Americans more, Ms Duzy-Venick is not willing to forgive and forget his derogatory remarks about women, Mexicans, Muslims and others.

She has joined efforts to keep the President-elect out of office. "Our goal now is to contact the electors and get their votes overturned on Dec 19," she said. "We want to get this egomaniac out of office."

Dec 19 is when electoral college electors vote for the president. 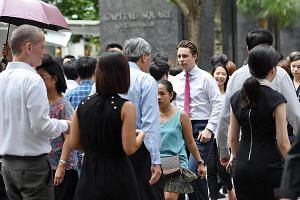 In Singapore, many Americans just want to move on

In under 24 hours, over two million people had signed an online petition asking the electoral college to elect Mrs Clinton as she won the popular vote. The college has never overturned a presidential result.

Of particular concern to Clinton supporters are Mr Trump's vows to end Obamacare, deport illegal aliens and appoint a Supreme Court justice who could overturn its 1973 Roe versus Wade ruling that, in a nutshell, legalised abortion.

Interestingly, the abortion issue was one that had a unifying effect within the Trump camp. Despite their own vast religious differences, many Catholics joined evangelicals to vote for Mr Trump.

Mr Tomasio Venditti, 53, a lay brother with the Legion of Mary, an international Catholic volunteer association, was one of them. He travelled 305km last month from Bolivar, Pennsylvania, to a rally in Strongsville, Ohio, to support now Vice-President-elect Mike Pence, who is strongly anti-abortion.

"His policies will save many babies from being aborted," he said of Mr Trump. "Because what he's talking about is bringing back jobs. He's talking about the economy - building it up again. So a young lady - who's pregnant, who has a secure job, whose husband or boyfriend has a secure job - is not going to be as quick to choose the abortion route because she's not worried..."

Mr Venditti hails from a borough with a population of just 500 people. But it is the heart of the large rural areas that, in the end, proved decisive in swinging Ohio, Michigan, Wisconsin and other states Mr Trump's way. They underlined the deep divide between their almost exclusively white, Christian suburbs and countryside, and their racially diverse, cosmopolitan urban centres.

"Trump is a candidate of white, working-class solidarity, or you can even say white nationalism," political analyst Kyle Kondik of the University of Virginia told Cleveland's Plain Dealer newspaper. "He has created such profound changes in the electorate that, if they endure, they likely will make Ohio a more reliably Republican state."

If that proves true, it may be quite some time before this country, and the world, sees a Reunited States of America.

Third night of anti-Trump protests across the US. http//str.sg/4g