US President has trump card and hard-core support, analysts say

Twelve months ahead of Nov 3, 2020, opinions on the next presidential election in the United States are as numerous as the rust red autumn leaves carpeting the sidewalks of Washington.

At stake is not just the White House, but 11 state and territorial governorships and also the 100-seat Senate, which currently has 53 Republicans, 47 Democrats and two independents.

Thirty-five Senate seats are up for grabs next year - including special elections in Arizona and Georgia - of which 23 are held by the Republican Party. Democrats need to gain only three or four seats to take control of the chamber. A growing number of Republicans are worried about not just losing the House - where they are already in a minority - but the Senate and the White House as well, Axios said last week.

But all is not quite well with the Democratic Party either.

The leading contender, former vice-president Joe Biden, is left of centre but establishment-friendly. While he commands respect, the 76-year-old does not generate the kind of excitement that President Donald Trump does. At a recent talk in Muscatine, Iowa, an elderly man fell asleep listening to Mr Biden, Associated Press reported. A new poll shows his popularity sagging in the swing state.

His current main rivals for the nomination are senators Elizabeth Warren and Bernie Sanders, both on the liberal progressive side of the party. As of last Tuesday, the Cook Political Report had them polling at 27.2 per cent, 21.8 per cent, and 17.3 per cent respectively.

Nine other contenders, from Indiana Mayor Pete Buttigieg - pronounced, as Mr Trump is fond of derisively saying, "boot-edge-edge" - at 7 per cent to Asian American entrepreneur Andrew Yang at 2.3 per cent, are way below the top three.

Not until the Iowa caucuses and the New Hampshire primary in February will it be any clearer as to who will get ahead, or if a dark horse candidate will emerge. 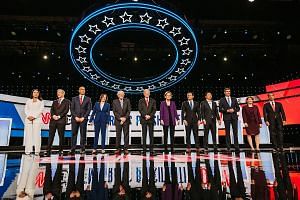 What is certain is that the election will be fought at a time of acute ideological polarisation. The Democratic Party has moved steadily to the left of the political spectrum, and the Republican to the right.

It is also almost certain - based partly on the 2018 midterms, which saw the highest turnout in four decades - that there will be a huge turnout next November.

Pundits are hoping that means pre-election polling will be more accurate than in 2016, when almost none predicted a win for Mr Trump. But while polls currently show the top running Democrats beating him, few are willing to bet that he will not win - and some are even boldly predicting that he will.

"At this point, I would not bet against President Trump winning re-election," said Dr Robert Manning, resident senior fellow at the Atlantic Council's Scowcroft Centre for Strategy and Security. "Anything is possible, but right now, I don't see a Democratic candidate who will beat him."

The fault lines are many - from socialism versus capitalism, to pro-life versus pro-abortion rights, pro-immigration and anti-immigration, as well as globalisation versus nationalism.

"But on an occupational level, globalisation and technology and trade create winners and losers...

"In the old days, if you didn't go to college but were a union member in Ohio, you had a great income and your spouse did not have to work and you had a camp on a lake and a fishing boat; you could have a good middle-class lifestyle on a single union wage. Now you can't... Part of that is simply about what part of the economy you are in."

The conventional view is that the state of the economy may decide Mr Trump's fate at the ballot. He constantly talks up the economy, which has been robust. Last Wednesday, third-quarter GDP growth was reported at 1.9 per cent - a modest slowdown but still above expectations.

Digital threats multiply ahead of 2020 US elections

As long as he can keep livening up the economy - with a proposed new tax cut; getting the US-Mexico-Canada Trade Agreement passed by Congress, and signing even a partial or "phase one" deal with China - the economy could keep humming.

But even that may turn out to be less of a factor than widely assumed. Many pundits have noted that Mr Trump's approval rating among his base has been rock solid - and it is possible even a slowing economy may not move it much.

And with its plethora of candidates, the Democratic Party is failing to focus on who can defeat Mr Trump, said one party insider. "They will fight it out, destroy each other and he will probably win again," the insider said.

"The only thing we know is that we have a long fight in front of us. He seems to create crises to put on other crises to make them go away - and he is really, really good at it.

"The media is not serving us well because they think he's an idiot, but he is not. He is a genius and until we see him as a genius, we're going to continue to lose to him."

Being impeached in the House - which is looking increasingly likely - means Mr Trump's fate will be decided by the Senate.

But with a two-thirds majority required, it currently remains a far cry that the Republican-controlled Senate will convict and remove him from office.

Such a half-baked outcome may serve only to inflame and rally his donors and his base, analysts say.

"He tailors his message to his base and he doesn't care what others think," said the Democrat insider. "And his base is hard core; they're not going to budge - and being impeached may be the best thing to happen to him."

A version of this article appeared in the print edition of The Sunday Times on November 03, 2019, with the headline 'Democrats seen failing to focus on who can beat Trump '. Subscribe
Topics:
More
Whatsapp Linkedin FB Messenger Telegram Reddit WeChat Pinterest Print Purchase Article Copy permalink