CHICAGO • Rare December tornadoes knocked cars off a highway and flattened homes in Texas, bringing the death toll to 25 in days of storms tearing across the southern United States.

The extreme weather, fuelled by unseasonably warm air, is likely to continue for the next few days, the National Weather Service (NWS) reported, snarling holiday travel across a large section of the nation.

The late Saturday deaths in Texas came as millions of residents in the southern US struggled to recover from fierce storms and heavy flooding, with more rain forecast. 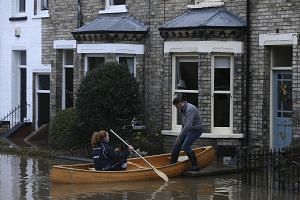 In pictures: Weather woes from around the world

At least 17 people have been killed in storm-related incidents since Wednesday in Mississippi, Tennessee and Arkansas states, local officials said.

At least eight people were killed as tornadoes touched down in parts of the densely populated Dallas-Fort Worth metroplex, local officials and media reported.

A twister struck on Saturday evening in Garland, Texas, city officials said in a statement.

"Five deaths have been confirmed," the statement said. "Extensive damage has been reported to vehicles, homes and apartments in the same area."

The deaths are "believed to be related to vehicles struck by the tornado", it said, adding that there was also an unconfirmed number of injuries and that teams of rescuers were arriving to help scour the damaged areas.

The tornadoes snapped power cables and knocked over pylons, leaving some 30,000 Garland residents in the dark, the city said.

"We're dealing with darkness out here," he said. "All of the street lights and highway lights are out."

Three other people were killed in weather-related incidents in Collin County, just north of the metroplex, the newspaper said, citing local police.

Local television weather reporters said 11 twisters touched down in the region, a figure the NWS was unable to immediately confirm.

Governor Robert Bentley declared a state of emergency to deal with the flooding just before Christmas Day tornadoes uprooted trees and tore off rooftops.

Residents of Elba town were nervously eyeing a levee that protected them from water from Pea River. The river was forecast to crest and possibly overflow the barrier, the AL.com news site reported.

In Mississippi, where governor Phil Bryant declared a state of emergency to deal with flooding, "severe storms" were forecast for late yesterday through today, the state Emergency Management Agency (EMA) said. "Tornadoes are possible and residents are asked to remain weather aware," it said.