WASHINGTON (AFP) - At least five people were killed when a gunman opened fire inside a newsroom in Annapolis, Maryland on Thursday (June28).

The suspect - who was being questioned in custody - was described as a white adult male armed with a rifle or a shotgun, who appeared to have acted alone and whose motive remained unknown.

Here are some of the deadliest mass shootings in the United States in the past three decades:

A 64-year-old retired accountant shoots down from his hotel room at a crowd attending an outdoor country music concert on October 1, 2017, killing 58 people and wounding around 550 before committing suicide. It is the worst mass shooting in modern US history.

A heavily-armed gunman opens fire inside a gay nightclub in the city of Orlando on June 12, 2016, killing 49 people. The attacker is killed in a shootout with police. He pledges allegiance to the Islamic State in Iraq and Syria group, which later claims responsibility. 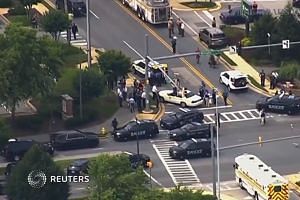 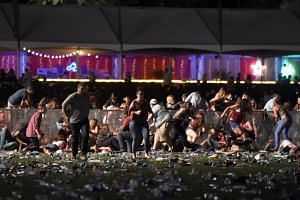 Almost 60 dead, more than 515 injured in deadliest mass shooting in US history

US students prepare for school shootings

A 23-year-old student of Korean descent goes on a rampage at Virginia Tech University in the town of Blacksburg in April 2007. He kills 27 students and five teachers before committing suicide.

A 20-year-old man kills his mother in Newtown, Connecticut, in December 2012 before blasting his way into Sandy Hook Elementary School and shooting dead 20 six- and seven-year old children and six adults. He commits suicide.

A 26-year-old man who was court-martialed while in the Air Force shoots dead 26 worshippers during Sunday services and wounds at least 20 others at a Baptist church in the small rural community of Sutherland Springs outside San Antonio, Texas, on November 5, 2017. The shooter flees and is later found dead in his car with a self-inflicted gunshot wound.

In October 1991, a man shoots dead 22 people at a restaurant in the town of Killeen, Texas and then kills himself. Another wounded victim dies later.

A 19-year-old former student at Marjory Stoneman Douglas High School who was expelled for disciplinary reasons returns to the school in Parkland, Florida, and opens fire on February 14, 2018, killing 14 students and three adult staff members.

A radicalised Muslim couple storm a Christmas office party at a social services centre in San Bernardino in December 2015 and gun down 14 people, wounding 22 others. They are shot dead by police.

In November 2009, a US army psychiatrist opens fire at his military base in Killeen, Texas, killing 13 people and wounding 42, before being overpowered by police.

A Vietnamese immigrant shoots dead 13 people at a civic centre in Binghamton, New York in April 2009, before killing himself.

Two teenage boys shoot and kill 12 classmates and a teacher at Columbine High School in Littleton, Colorado, in April 1999, before killing themselves.

A former serviceman shoots randomly at workers at the Washington Navy Yard headquarters in September 2013, killing 12 people before he is shot dead by officers.

A young man wearing body armour opens fire in a movie theatre showing a late-night premiere of a Batman film in Aurora, Colorado in July 2012. Twelve people are killed and 70 wounded. He is sentenced to life in prison.