But front runners Trump and Clinton lead polls in delegate-rich New York, the next stop

It was the night of the underdogs in Wisconsin on Tuesday, as senators Ted Cruz and Bernie Sanders defeated Mr Donald Trump and Mrs Hillary Clinton in their respective party primaries, picking up delegates and adding momentum to their flagging presidential campaigns.

Mr Cruz's sweep of 36 of Wisconsin's 42 delegates signals that the Republican establishment is "coalescing around" him, said political science professor Thomas Holbrook of the University of Wisconsin-Milwaukee.

It increased the likelihood of a prolonged nomination fight that could continue until the Republican Party convention in July. 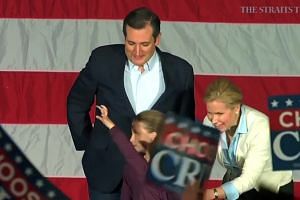 Although the Cruz win adds some "fuel to the 'Stop Trump' campaign, it may only slow him (Trump) a bit", said Professor Holbrook.

"The next stop for the Republicans is delegate-rich New York, which is winner-take-all, and where Trump has a big lead in the polls," he added.

According to political website Real Clear Politics (RCP), Mr Trump has a 32 percentage point lead over Ohio governor John Kasich and a 34-point lead over Mr Cruz in New York.

Still, Tuesday's results in Wisconsin have made it more difficult for Mr Trump to reach the 1,237 delegates needed to automatically claim the party's nomination at the Republican national convention.

Mr Trump has 743 delegates compared with Mr Cruz's 517, according to the Associated Press.

A statement issued by the Trump campaign called Mr Cruz a "Trojan horse, being used by the party bosses attempting to steal the nomination from Mr Trump".

It went on to say that the campaign has "total confidence that Mr Trump will go on to win in New York... and beyond".

At the Democratic camp, Mr Sanders' triumph - he has now won six of the past seven Democratic contests - bolsters his claim to be a viable alternative to Mrs Clinton, a former secretary of state.

The Vermont senator now has 1,058 delegates to Mrs Clinton's 1,748, according to the Associated Press.

A total of 2,383 delegates are needed to secure the Democratic ticket.

In an  open primary,  independent voters - who generally support Mr Sanders - can vote for a Democratic candidate without registering with the party.

Mr Sanders had the support of 72 per cent of the independent voters in the state, according to broadcaster CNN's exit poll.

He also won big with young voters and was the preferred candidate of 82 per cent of those aged 18 to 29. But he will also face a difficult fight in New York, which is Mrs Clinton's home state.

According to RCP, Mrs Clinton has an  11 point lead over Mr Sanders.

Prof Holbrook said the Wisconsin victory would give Mr Sanders' campaign "a bit of a tailwind, psychologically, but he would not be able to make up much ground in terms of delegates since Wisconsin Democrats use a proportional system for allocating delegates".

Mr Sanders, however,  sounded upbeat about his chances.

"I believe we have an excellent chance to win New York and a lot of delegates in that state," he said, adding that he was gunning for victory in western states such as  Oregon and California as well.

Looking ahead to the presidential election on Nov 8 and encouraging Democrats to vote, Mr Sanders  said: "We will win in November if there is a large turnout.

"Republicans win when people are demoralised. This campaign is giving energy and enthusiasm to millions of Americans."